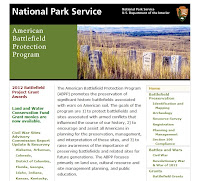 Congratulations to our partners at Ball State University for their successful grant application to the National Park Service’s American Battlefield Protection Program!

On November 4, 1791, at the Battle of the Wabash, a coalition of American Indian tribes led by the Miami chief Little Turtle and the Shawnee chief Blue Jacket destroyed an American army sent against their people. This was the most catastrophic defeat ever suffered by the United States at the hands of American Indians. In 1773, General Anthony Wayne built Fort Recovery on the site of this epic, but surprisingly little known, battle. On June 30, 1794, 2,000 American Indians attacked the fort, but were repulsed after a two day battle. As part of the NPS grant, Ball State University and its partners intend to hold a series of public consensus meetings in support of Fort Recovery. This project also will support the creation of a more complete and comprehensive National Register nomination.

According to the NPS website, “The American Battlefield Protection Program funds projects conducted by federal, state, local, and tribal governments, nonprofit organizations, and educational institutions. The ABPPs mission is to safeguard and preserve significant American battlefield lands for present and future generations as symbols of individual sacrifice and national heritage.”