Since August of 2012, the Ohio Historical Society Archaeology staff has been engaged with archaeological recovery efforts at the Bimeler House in Zoar Village. 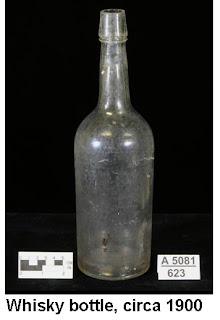 Back in 2006, the Bimeler House foundation was damaged by flooding that seeped underground from a U.S. Army Corps of Engineers levy that was filled to capacity from flooding.  Unfortunately, the damaged foundation caused the Bimeler House to become unstable. Experienced house movers from Dingey Movers literally lifted the house from its foundation using wooden cribbing and large metal posts.  When the house was lifted, the original basement vault and foundation were dismantled and a new foundation was installed by experienced masons from EMI.  The original vault stones were taken apart piece by piece and in order and will be set back in place once the foundation has been completely set. During monitoring and archaeological recovery efforts, over 730 artifacts were recovered.  Of these artifacts, two are of special interest. 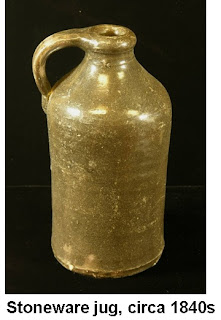 The first of these artifacts of note is a complete whisky bottle that was found in the cellar of the Bimeler House.  While the make and size of the bottle is consistent with an age shortly after the closing of the Zoar Village(1894), the bottle is complete and in remarkably good shape.  Often times, bottles of this size and shape are recovered in pieces.

The second artifact is a stoneware jug that was found during our excavations.  The stoneware jug dates to the period of activity at Zoar village and also is in remarkably good shape.  The jug is of simple design and make and may have been used by a member of the Zoar community sometime in the 1840s.

The Bimeler House collection is still being processed, so stay tuned to this blog for future updates.