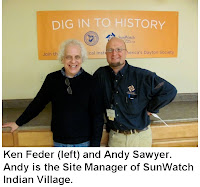 A standing room only crowd at the SunWatch Indian Village museum watched Ken Feder, professor of Anthropology at Central Connecticut University, gleefully eviscerate the so-called evidence and arguments offered in support of the claim that aliens have visited the Earth in antiquity.

Ken’s presentation was the first in a series of lectures addressing Myths and Mysteries in Archaeologysponsored, in part, by the Archaeological Institute of America.

Ken argued that the ancient astronaut theory, as popularized originally by Erich von DÃ¤niken and now by the History Channel’s program Ancient Aliens, actually includes three separate hypotheses all of which are either transparently ludicrous or thoroughly falsified — or indeed both.

According to the amorous astronaut hypothesis, humans are the result of aliens crossbreeding with our early apelike ancestors — either because “Lucy” and her kind were so irresistibly attractive or the ancient astronauts were so desperately lonely. Of course, having evolved on a different planet the alien’s genetic makeup would be so fundamentally different from ours that it would be a biological impossibility for the two species to crossbreed. Feder quoted Carl Sagan as suggesting that humans would have a better chance of crossbreeding with a petunia than with an alien as we share at least some proportion of our DNA with a petunia.

The Inkblot Hypothesis asserts that it is possible to discern depictions or descriptions of ancient extraterrestrial visitors in rock art or early religious texts. The problem here is that all of the examples claimed to represent ancient aliens are subject to alternative interpretations that are much more inherently plausible. Moreover, most of the interpretations offered by von DÃ¤niken and others totally ignore what we know about the original cultural contexts of the art. For example, a headdress with antlers becomes a space helmet with antennae, atlatls (or spearthrowers) become ray guns, and a sacred World Tree becomes a rocket ship.

The Our Ancestors, the Dummies Hypothesis

This is perhaps the most pernicious aspect of the ancient astronaut theory. It asserts that many of the worlds ancient architectural wonders, such as the pyramids of Egypt or the giant stone statues of Easter Island, could not have been built by humans without the technological aid of ancient astronauts. Feder points out that there is a strong racist element in the examples von DÃ¤niken offers in support of this hypothesis, because theyre nearly all from non-European cultures. Apparently, the Greeks could build the Parthenon and the Romans their Colosseum without extraterrestrial help, but non-Europeans seemingly were not able to create such wonders on their own. That’s insulting to all human beings, Feder concluded.Ken doesn’t dismiss the possibility that aliens might have visited the Earth in ancient times, but argues that, so far at least, there is no evidence whatsoever that it ever actually happened. 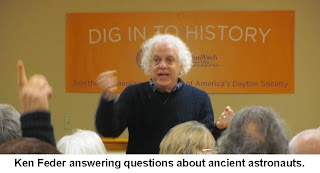 This was a great kick-off to the Myths and Mysteries in Archaeology lecture series, but Kenny will be a tough act to follow. So, of course, Im next on the program with a presentation on the Newark Holy Stones set for Saturday February 16th. I will hope to see you all there. 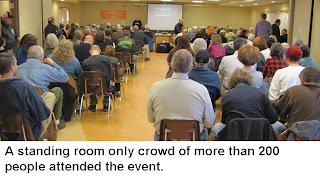