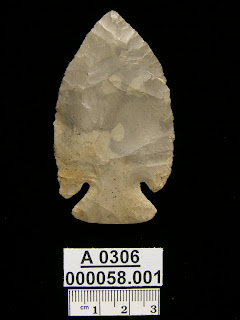 Among the resources that made Ohio attractive to its ancient native inhabitants was the seemingly endless supply of high quality flint. Flint was an indispensable part of their existence, allowing them to fashion the projectile points, knives, scrapers and cutters necessary to create other parts of their material culture. While there are several varieties of flint or flinty materials native to Ohio, the Flint Ridge and Upper Mercer (Coshocton) materials found in the Pennsylvanian age bedrock of eastern Ohio were the most widely utilized. These flints occur in massive bedded deposits that could produce large quantities of high quality flint. Its not unusual for one or the other or both of these flint types to make up a major portion of raw material represented in just about any large Ohio artifact collection or that an item made from one of these flints to be found hundreds of miles from where it was made.

That is not to say that there werent other flint sources nearly as important as these to ancient Ohioans, but sources that were only utilized on a more local level – like Delaware Chert. Delaware Chert is a Devonian age flint that occurs in the Delaware Limestone formation northward through the center of Ohio from Columbus to Lake Erie. Unlike colorful Flint Ridge Flint or the glossy blue-black Upper Mercer material, Delaware Chert has a rather drab earth tone appearance and texture with coloration ranging from light tan through a dark almost black chocolate brown. It is often observed in finished artifacts that there remains a certain amount the flinty carbonate matrix or cortex still visible. One of the more notable outcrops is along the Olentangy River in the vicinity of the Franklin-Delaware County line. Instead of being found there in massive beds like the Flint Ridge or Upper Mercer materials are at their sources, Delaware Chert occurs in small nodules and lenses or stringers within the bedrock matrix. It can also be found as small, reduced fragments in stream gravels.

As a locally favored raw material it seems to have been most heavily utilized from the Early Archaic through the Early Woodland periods (9,000 to 2,500 years before present) especially for items such as scrapers, knives and smaller projectile points although it was likely used by all prehistoric cultures within its main catchment or area of occurrence. However, because of the somewhat dispersed and thin nature of how it is found geologically, larger objects made of Delaware Chert are somewhat rare. It should be noted that a modern flint knapper usually starts with a blank 25% to 50% larger than the desired finished product when crafting a projectile point. The same was likely true in prehistory. In other words, to make a large spear point it takes an even larger piece of flint and relatively large pieces of Delaware Chert arent that common.

The attached image is of an exceptional flint artifact from the OHS collections. A306/58.001 is an Early Archaic Thebes series point, dating to about 8,750 years before present. Thebes points were so named by Howard D. Winters in 1967 for examples found near the town of Thebes, located along the Mississippi River in southern Illinois. There are several related varieties or sub-types commonly found throughout the Middle-Mississippi and Ohio River Valleys which, for a number of reasons, more likely functioned as hafted knives rather than spear points per se. This particular object was part of the J.L. Smith Collection from Delaware County, Ohio. According to a newspaper clipping attached to the collection file, Mr. Smith was a dedicated Indian relic collector who, over a nearly 50 year span between the 1870s and the 1920s, amassed a very impressive 8,000 piece artifact collection that was found entirely in Delaware County. In its day it was touted as perhaps the largest single county assemblage in the entire state. In 1923 the Smith collection was placed in the care of the Ohio Archaeological and Historical Society for future generations to appreciate and accepted on behalf of the Society by Curator of Archaeology William C. Mills.

A306/58.001 is an extremely thin, well flaked point, measuring about 70mm long x 41mm wide x 7.5mm thick. Its made of a high quality light gray/tan Delaware Chert with a sizable portion of the original carbonate or limestone matrix still attached. The point is notable not only for its relatively large size, raw material and workmanship but also for the fact that it is in an almost pristine condition, having been re-sharpened no more than once or twice. More typically the blade portion of heavily re-sharpened points of this type will develop a steep, beveled edge and acquire a slight twist when viewed on end; enough so that many old time collectors would refer to them as rotary points. Continued edge maintenance would eventually reduce the blade to a point where it appears completely out of proportion with the base and bear little resemblance to its original form. Blade re-sharpening would continue as needed until the service life was exhausted and the object discarded. It would be replaced by a newly flaked item and the cycle continued. Exceptional flint artifacts arent always those made of exotic flint and found hundreds of miles from where they were made because of some elaborate trade network. Sometimes they can just be remarkably well crafted items made from selected local flint that were just never meant to travel far beyond the locale where they were made. They were to be used for ordinary tasks by the hand that fashioned them and perhaps should just be appreciated for the same aesthetics that inspired the maker.