Ohio’s other effigy mound, Alligator Mound, is located in Granville. The mound is over 200 feet long and between four and five and feet high at its highest point. It is located on the top of a bluff overlooking the Raccoon Creek valley. 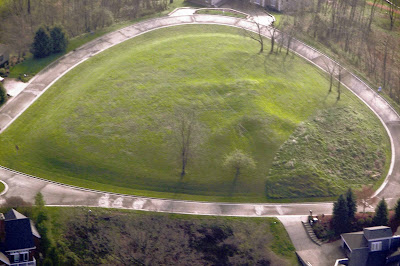 In spite of its name, the mound doesn’t really look anything at all like an alligator. It is in the shape of a four-footed creature with a round head and a long tail that curls at the end. For a lot of reasons, I think it represents the Underwater Panther, a powerful and dangerous supernatural creature thought by many American Indian tribes to reside in lakes and other bodies of water. This may be why the early Granville settlers ended up calling it Alligator Mound. If they had asked local Native people what the mound represented and had been told it was a large and dangerous creature with a long tail that lived in the water the settlers may have jumped to the conclusion that the Indians were talking about an alligator. If so, this would explain why the seemingly incongruous name stuck. It was an alligator because the people who would know said it was! Some years ago, my wife Karen and our two sons Ben and Peter, much younger then, made a model of the Alligator out of Lego bricks for a homeschool project. I recently came across a picture of the model and thought Id post it here to see if it inspired anyone to create models of some of Ohio’s other ancient earthworks. 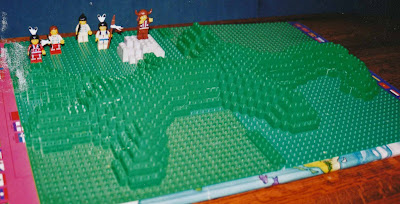 The Alligator Mound is listed on the National Register of Historic Places. It is owned by the Licking County Historical Society. It may not be as impressive as the Great Serpent Mound, but its worth a visit. For more information about Alligator Mound, check out my article Ohios Alligator in the March-April 2001 issue of Timeline.