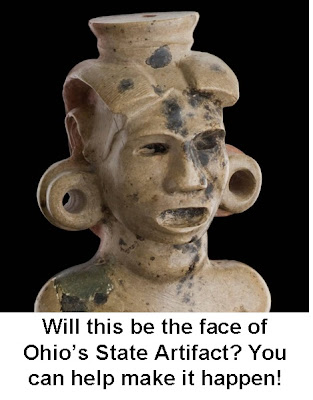 On November 28th, the Ohio House voted unanimously to adopt the Adena Effigy Pipe as Ohio’s State Artifact! Now it’s up to the State Senate to consider the bill before the end of the year. If they don’t get to it, then this bill is dead and the process must start over from scratch next year. The idea to honor Ohio’s ancient Native American heritage by making this amazing sculpture our official State Artifact is brilliant and originated with students and teachers from the Columbus School for Girls. So, the Ohio Historical Society and the Columbus School for Girls are asking for your help. If you think Ohio’s history didn’t begin in 1804 and that our Native American heritage is important to recognize and honor, then contact your local senator, President Tom Niehaus, and incoming President Pro Tempore Keith Faber to urge them to pass this bill now!