Last year, Charlotte Stiverson and Tracy Kessler, two teachers from the Columbus School for Girls, and their fourth grade classes began the process of having Ohio’s General Assembly recognize the Adena Effigy Pipe as Ohio’s official State Artifact. Their efforts are continuing this year — aided by the students of the current fourth grade classes and the fifth grade teachers of Charlotte’s and Tracy’s former students!  Thanks to their efforts State Representatives John Carney and Mike Duffey are co-sponsoring House Bill 501 to add this magnificent sculpture of an ancient American Indian dancer to the list of iconic symbols that help to define our State! 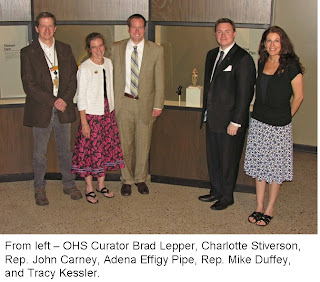 It would hard to find a more appropriate artifact for this purpose!

The Adena Effigy Pipe is the oldest known rendering of a human in Ohio’s corpus of indigenous art. And human effigies allow us to make an immediate and special connection with the people of the past.

It was found in the Adena Mound, which was located on the Chillicothe estate of Thomas Worthington, Ohio’s sixth governor and one of its two first senators. The pipe has become a hallmark of the Adena culture (circa 800 B.C. – A.D. 100), which was named for the mound.

The Adena Effigy Pipe is one of the most famous artifacts in the collections of the Ohio Historical Society and is, perhaps, the artifact that is most often illustrated to represent the ancient American Indian cultures of eastern North America.

Listing the Adena Effigy Pipe as Ohio’s State Artifacts would honor our indigenous heritage by giving a face to the too often forgotten American Indian people who were the first Ohioans.

Please contact your legislators if you agree that Ohio’s ancient indigenous cultures should be honored by listing this wonderful effigy pipe as Ohio’s Official Artifact! For more information about the Adena Effigy Pipe, check out my article in the January/March 2012 issue of Timeline magazine: “The Adena Pipe: Icon of Ancient Ohio.” 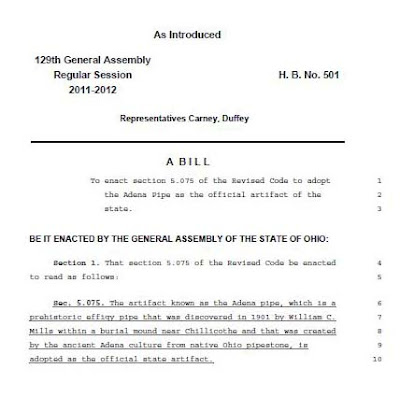