According to William C. Mills, former Curator of Archaeology (and later Director) of the Ohio Historical Society, there used to be 132 mounds and 28 earthen enclosures in Franklin County. Very few of these have survived the depredations of historic farming and more recent development across the county. Four mounds located north of Columbus were going to be lost when Alum Creek was dammed to create the Alum Creek Reservoir. They included the Bagley Mound, James Mound, La Moreaux Mound, White Mound and Alum Creek Mound. Fortunately, however, at least these mounds were investigated by the Ohio Historical Society, under contract to the National Park Service, prior to their inundation, so we have a record of what they contained and not just the objects themselves, but also detailed records of their context. 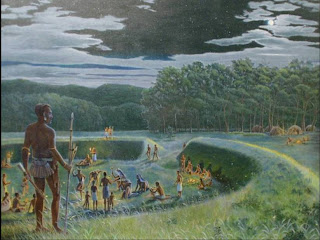 They appear to be more or less typical burial mounds of the Adena culture, although the archaeologists recovered no formal burials and only a few fragments of burned human bone from these mounds. The Bagley, James, La Moreaux and White Mound had traces of circular wooden structures at their base that likely served, at least partly, as places where mortuary rituals took place. Perhaps the honored dead were housed here on a temporary basis, while the proper rites were performed. Once the rituals were concluded, the spiritual leaders removed the human remains, dismantled the structures and built a mound over the site.

In my latest column for the Columbus Dispatch, I report on a recent re-analysis of these mounds undertaken by Christopher Hays, an archaeologist with the University of Wisconsin Washington County. Hays’ results appear in the Summer 2010 issue of the journal Southeastern Archaeology. He compared what was found in the Alum Creek mounds with what Ohio Historical Society archaeologists found in four approximately contemporary mound sites from the Columbus area the Davis and Greenbrier mounds located along Big Walnut Creek, the Toephner Mound located along the Scioto River just north of its confluence with the Olentangy River and the Dominion Land Company site, which included a large circular enclosure and two mounds located along the Olentangy River. You can read my Archaeology column in the Columbus Dispatch to see what Hays learned about the patterns of mortuary ceremonialism in the mounds from these two neighboring areas, but it’s a fascinating look at the religious lives of the American Indian peoples that lived in central Ohio between about 800 BC and AD 100. It’s worth noting, however, that Hays’ reanalysis would not have been possible if the artifacts, photographs and records of these investigations had not been maintained by the Ohio Historical Society.

Our collections are a kind of library that researchers can consult for new insights into the lives of ancient Ohioans. As new analytical techniques are developed or new explanations are proposed, these collections can be consulted to learn new and formerly unexpected things or test new hypotheses about the life and times of ancient cultures. If a researcher in the future decides, for example, that Hays was wrong about some of his interpretations, the material will be here for her or him to check the facts against their alternative hypothesis. That’s how science works.

Heres the link if you want to read my Dispatch column: http://www.dispatch.com/live/content/science/stories/2011/03/27/adena-groups-had-own-burial-practices.html?sid=101 The painting is by Susan A. Walton from the Ancient Ohio Art Series and represents a portion of the Adena culture earthworks near The Plains along the Hocking River in Athens County, Ohio. For more information about the Ancient Ohio Art Series, check out OhioPix at http://ohsweb.ohiohistory.org/ohiopix/search.cfm