One thing telling about watching an episode of the Antiques Road Show is that by nature some people seem to be born collectors and seldom if ever do they turn down an opportunity to acquire something rare and unusual. While this might seem like a somewhat recent phenomenon, it is likely that people have been collecting the strange and unusual as long as there have been such things to find. In an earlier posting entitled Selected Objects from the OHS Archaeological Collections it was reported that one of the fine spear points shown was found in Ross County by Captain Charles McGinnis some time in the late 1800s. Some who read the post found the fact that it had been originally collected more than 100 years ago by a veteran of the Civil War nearly as interesting as the spear point itself. 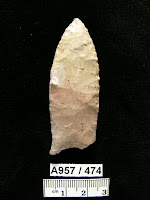 However, there are some objects in the OHS collections that were found and collected in even earlier times. A case in point (no pun intended) is the projectile point pictured on the right, object # A957/474. It was recovered during the 1971 field season at Seip Earthworks near Bainbridge in Ross County. It was found in a floor midden associated with a house structure north of the great mound among animal bone fragments, pottery shards, bits of mica and broken bladelets – just the kind of material that one would expect to find in a 2,000 year old Hopewell/Middle Woodland midden feature. The kicker is that A957/474 is actually a Beaver Lake point that, as a type, predates the Seip Earthworks and the entire Middle Woodland period by several thousands of years to the Late Paleo / Early Archaic period. This is roughly 9,500 to 10,000 years before present.

Beaver Lake points were named in the literature in 1962 by David De Jarnette and others for Beaver Lake in Limestone County, Alabama but are found throughout the Tennessee and Cumberland River drainages as well as along the lower Ohio River and into the middle Mississippi valley. Stylistically they seem to cluster with Cumberland and Quad points both temporally and geographically. Several Beaver Lake points were found below the Dalton zone at the Olive Branch Dalton Site in Alexander County, Illinois where they were firmly dated to right at 10,000 years before present. Generally speaking Beaver Lake points are thin and well made lanceolate points with re-curved lateral edges that form an expanding base or stem. These margin areas typically show a certain amount of light grinding or smoothing. Also the base is often further thinned by the removal of one or more small flakes.

A957/474 is an excellent example of the type. It is 64 mm in length x 22 mm in width and a mere 5 mm thick. It is lenticular in cross section and was produced through a combination of random percussion and pressure flaking. One basal corner or ear is missing in what appears to be an ancient break. It is made from a bi-color tan and light brown flint that has a slightly reddish caste to it, likely due to exposure to the heat of a fire. The exact type of flint used to make the point is not readily apparent. This is typical of many early point types with wide distribution patterns. Often times points made from a minor type of flint are found many miles from its source making it difficult to nearly impossible to visually identify.

It can be imagined that whoever happened across this already ancient point some 2,000 years ago was intrigued by its unusual form and simple aesthetics. They lived in a world of stone tools and yet it was not quite like anything they had seen before. They were likely proud of their find and felt privileged to be the only one to possess something so rare and unusual. Not at all unlike those who collect things today.