A WALK THROUGH THE PAST

A WALK THROUGH THE PAST

In a rare convergence of scientific and artistic worldviews, T. S. Eliot wrote that “all time is eternally present,” while Albert Einstein agreed that “the distinction between past, present, and future is only a stubbornly persistent illusion.”
Last Saturday, August 11th, I put these congruent insights to the test.

In the company of about 25 other participants, I took a walk with our guide, Jeff Gill of the Ohio State University’s Newark Earthworks Center, along the avenues of ancient Newark. Except for the spectacular Octagon Earthworks, the Great Circle Earthworks, and the miniscule remnant of Newark’s once grand square enclosure at the Wright Earthworks, it was often hard to discern the now mostly faint echoes of the ancient magnificence that was the Newark Earthworks. But it was a walk well worth taking. 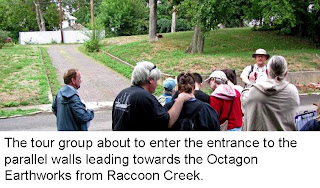 In 1848, Ephraim Squier and Edwin Davis reported the findings of a similar walk they had taken and observed that “the ancient lines can now be traced only at intervals among gardens and outhouses.” In the years since the publication of their marvelous maps and surveys, appearing as the first volume in the Smithsonian’s Contributions to Knowledge series, the pace of destruction accelerated as the City of Newark prospered and spread across this “remarkable plain.”The erasure of those components of the Newark Earthworks not preserved within the limits of the OHS parks, is now so nearly complete that it’s easy to understand why many people, even residents of Newark, think there is nothing left of them. You can drive or even walk past them and never realize they are there. Yet there are, indeed, other remnants of the earthworks preserved in front yards, back alleys, or beneath the streets of modern Newark.

It can be heart-breaking for an archaeologist, or anyone who cares deeply about America’s ancient heritage, to stand in a modern intersection surrounded by modern houses and know that you are standing within what was once the center of a small circular enclosure — a place where pilgrims may have purified themselves before entering the grander enclosures. At the same time, it’s powerfully moving to know, on the basis of old maps and early aerial photographs, that you are, in fact, standing within that now invisible circle and that traces of this vanished architecture as well as evidence for how it was used by the people who walked there two thousand years ago still may lie hidden beneath your feet. 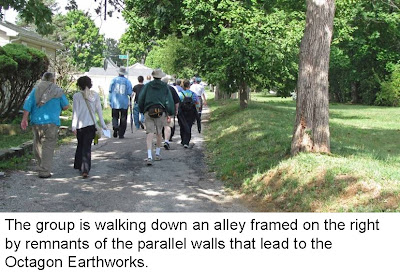 The most important thing I got out of the experience was a visceral understanding of how the monumental Octagon and Great Circle earthworks were integrated with each other, with all the missing pieces of that vast labyrinthine earthwork complex, and with the streams that still frame this sacred landscape.

To walk those ancient paths as they may have been walked by others so long ago allowed me to feel in my muscles and sore feet something of the lives of the people whose works I have devoted so much of my life to understanding in more cerebral ways. Indeed, I felt a connection to those people and their works much like what T. S. Eliot must have had in mind when he wrote that “all time is eternally present.”

PS  Just in case you’re interested, another one of these walks is in the works for October 13th. Watch the Newark Earthworks Center’s Facebook page for details.