A VISIT TO PINSON MOUNDS IN TENNESSEE

A VISIT TO PINSON MOUNDS IN TENNESSEE 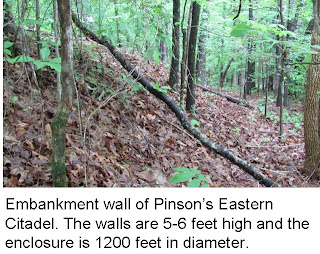 First, Newark and Pinson are the largest earthwork centers in their respective regions. Pinson is the largest Middle Woodland earthwork center in the southeastern United States. The Pinson complex included a large circular enclosure and at least 17 mounds spread across more than 400 acres. The Newark Earthworks is the largest in Ohio actually in all of North America. Originally it encompassed two large circular enclosures, an enormous octagon, an oval earthwork surrounding a dozen mounds, and a large square enclosure all interconnected by a series of parallel walls spreading across an area of more than 2,000 acres.

Second, the great circular enclosure at Pinson has the same diameter as Newarks Great Circle, 1,200 feet, and also is associated with a three-lobed mound that some people think represents a bird effigy similar to Newarks Eagle Mound located within the Great Circle. (In both cases, the idea that the mounds are effigies is probably wrong.) 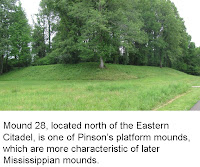 Third, Newark had at least one flat-topped platform mound at the site and Pinson had several. Platform mounds are not common at Middle Woodland sites. They are much more typical of later Late Prehistoric (Mississippian) sites throughout eastern North America. Fourth, both the Newark and Pinson earthworks incorporate astronomical alignments in their architecture. Finally, small bladelets made from Ohios Flint Ridge flint have been recovered from Pinson. These may have been brought to the site by pilgrims or traders who had been to Newark. I had my first opportunity to visit Pinson Mounds last week while attending the Society for American Archaeology annual meeting in Memphis. I expected to feel right at home while walking through this earthwork complex, but, instead, I was struck by a very different sense of how the site was situated within its landscape. At Newark, the builders selected a broad, flat terrace for their ceremonial center, which they likely modified by artifically leveling the areas on which they erected the great geometric enclosures. 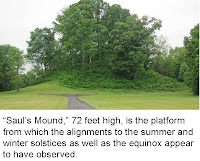 At Pinson, the large circle straddles a couple of ravines and Tennessee archaeologist Mark Norton has suggested it actually served to funnel rainwater into the western half of the enclosure where it may have collected into an artificial reservoir. He compares it to structures built by modern farmers in Tennessee to create cattle ponds.

All of this served to remind me that the Middle Woodland Hopewell culture, whatever it was, was most definitely not a rigid set of practices to which the diverse societies of ancient eastern North America had to conform. Instead, it appears to have been more like a menu of architectural styles, ceremonies and beliefs that were adopted by and adapted to the needs of local communities.

I am sure that Hopewellian visitors from Newark would have found much at Pinson that they would have found familiar, but the site also would have offered much that was new and either exciting or shocking depending on the individual’s sensibilities. We dont know enough about the timing, but its possible that Newarks platform mound was built after returning pilgrims brought stories of how this new architectural form was being used to great effect at this grand, southeastern ceremonial center.

For more information about Pinson Mounds check out the following websites: