A View Within the Circle

A View Within the Circle

At one time the whole of the Newark Earthworks, a set of geometrically shaped earthen embankments, raised platforms, burial mounds and parallel walls without equal covered nearly four square miles of the level lands along Raccoon Creek in Licking County, Ohio. It has been remarked that it could easily have been the worlds most expansive archaeological setting outside the Giza Plateau and the Great Pyramids of Egypt. According to a chronology established by a series of Carbon 14 dates obtained there in recent years, construction of the earthwork complex bridged nearly five centuries between 160 B.C. to A.D. 310 and therefore is correctly attributed to Ohio’s Hopewell culture. For nearly a millennium and a half after the original builders moved on for whatever reason, the mounds and earthworks stood there in silent and resolute testimony to the industry of the human spirit. However, in the time since the city of Newark was founded in 1802, the earthworks have undergone a number of significant changes. Many of the mounds and smaller earthworks disappeared literally overnight as Newark expanded and further progress came to that part of Licking County, in the form of the canal system followed by the railroad and finally an improved highway system. It wasn’t so long until what was once an absolute marvel of engineering, construction and human endeavor was reduced to just its two largest elements, the Great Circle and its cross-town neighbor, the conjoined Observatory Circle and Octagon at Octagon Earthworks State Memorial. Looking closely at these two remnants, each has an interesting story of how and why they were preserved and why what we see there today is there to be seen at all. 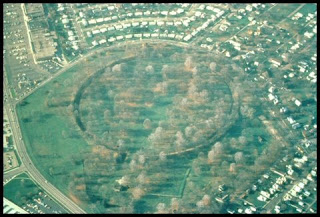 A case in point is the Great Circle, seen in the aerial image above. Today the Great Circle with its large trees and open park-like surrounds is a serene and tranquil setting that imparts a sense of peace and isolation from the busy work-a-day world that seems to be closing in from all sides. Obviously for the builders to have invested so much labor it must have been a place of notable importance, a sacred place, a festive place where achievement was celebrated, a place of obligation and commemoration, a gathering place for esteemed and prominent leaders. The ceremonies and pageantry that took place there in the distant past can only be imagined. I suppose it can also be imagined that there probably hasn’t been too many grand soirees that have taken place there in the intervening dozen or more centuries. That in the past two hundred years, this pastoral setting was never much more than a park of sorts, a place to while away a warm afternoon and perhaps have a picnic lunch in the shade of a giant oak tree; a pleasant green space but certainly a place without all the parade, pomp and circumstance of bygone times. Should you think this to be the case then by all means read on.

The Great Circle, formerly known as Mound Builders State Memorial, is located a couple miles south and west of the original town limits of Newark, Ohio. Surrounded by what was once a forest followed by wood lots followed by corn fields, the Great Circle is now encircled by neighborhoods, shopping centers, busy thoroughfares and all the other trappings of modern life.

The Great Circle is 1200 feet in diameter and is extremely close to being exactly round according to Pi times the diameter. The earthen embankment wall is 10-12 ft high and is complimented by an interior ditch or moat of like dimensions in sort of a positive and negative space arrangement. There is nothing to indicate that the moat ever held water and even in times of persistent, heavy rain the accumulation of water in the so-called moat is negligible. The interior of the circle is accessed through a gate/causeway formed by the turn-out of two short sections of the wall and moat on the northeast side as seen on the left. 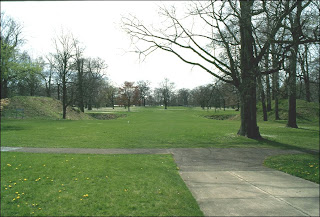 Compare this view with the rendering on the right sketched by Benson J. Lossing in the 1850’s and appearing in his Pictorial Field-Book to the War of 1812.

The interior of the circle is mostly level and contains approximately 30 acres. How large an area is this? Think of it in this way. Something as massive as the Ohio State University football stadium would easily fit within the circle as evidenced in the image of the stadium below with the circumference of the Great Circle superimposed around it! 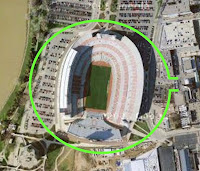 Stonehenge, the quintessential embodiment of ancient architecture could have been constructed eight times over inside the Great Circle, leaving plenty of room to spare. I am often struck not so much by how or why they built the Great Circle as much as I am by how they ever conceived of such a structure! At the center point of the circle is a low, multi-lobed rise referred to as the Eagle Mound, likely because of the abstract manner in which it resembles an eagle with its wings spread (right). 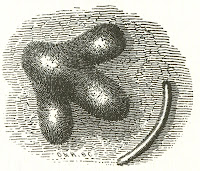 Archaeological excavations conducted there in the 1928 by Emerson Greenman revealed that the mound contained no burials but, in true Hopewell style, the mound had been constructed over the remains of a large, rectangular, multi-post house and screening fence arranged in a T shaped manner.

The mounds eagle shape was most likely an artifact of how the remains of the structures were covered with earth although this does not mean that the final shape of the mound wasnt itself refined and stylized, also a distinct Hopewell trait.

Did the structure arrangement dictate the shape of the mound or was the mound constructed in a way to not only cover the structural remains but to express or convey other meanings as well. Its sort of like what came first, the chicken (or eagle) or the egg. That being said it is interesting to note that a similar design is found as an engraved decoration on a small, pierced stone tablet from the Tremper Mound. 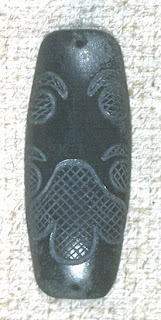 The tablet (A125/150), also referred to as a gorget, is rather thick and loaf shaped and made from high grade black Ohio shale. It was among the several hundred items recovered from the main artifact cache by William C. Mills during his 1915 excavations at Tremper. The lobed design is deeply incised with cross-hatched lines and accompanied by four smaller engraved and cross-hatched coma-shaped designs themselves reminiscent of a series of copper cut-outs recovered from the Hopewell Mound Group by Warren Moorehead. The designs are regularly spaced in what appears to be an intentional pattern. Perhaps in the end there is more to the eagle design than meets the eye.

The first published map of the Newark Earthworks was included in Caleb Atwaters A Description of the Antiquities Discovered in Ohio and other Western States (bottom) issued by the American Antiquarian Society in 1820. Atwaters work was reviewed and favorably commented on by no less a person than Thomas Jefferson who, among his many interests, was an early advocate of the scientific study of North American prehistory. In 1848 Charles Whittleseys survey ofthe Newark Earthworks (top) was published by the Smithsonian Institute in Squire and Davis Ancient Monuments of the Mississippi Valley, the initial publication of the Smithsonian in its Contributions to Knowledge series. Even after a century and a half, Ancient Monuments is still acknowledged as the bible of mound archaeology in North America. There were in addition to these several other surveys completed throughout the remainder of the 19th Century.

In the early 1860’s Licking County Surveyor David Wyrick produced a highly detailed map of the Newark Earthworks about the same time as did brothers James and Charles Salisbury residents of Newark and early practitioners of scientific archaeology. In 1894 Cyrus Thomas and James D. Middleton of the Bureau of American Ethnology published their 1888 survey of the Newark works in the monumental Report on the Mound Explorations of the Bureau of American Ethnology appearing in the BAEs 12th Annual Report. Thomas’ and Middleton’s treatise was considered to be the final word in the debunking of the previously common theory that the Moundbuilders were a seperate lost race rather than the ancestors of the Native Americans.

In 1853 the Great Circle was purchased by the Licking County Agricultural Society and for the next several decades was home to the Licking County Fair and occasionally the Ohio State Fair. At least locally the Great Circle was referred to as the Old Fort, perhaps in a passing allusion to the arcane notion that it was a place of refuge and defence for the Moundbuilder Race in their great showdown with the American Indians. It would seem that the allure of the Old Fort as the site of annual agricultural celebration became as much a part of the event as the fair itself. 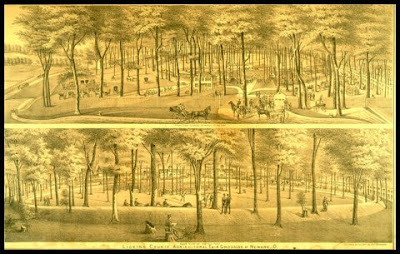 The image above is of a late 19th century twin panel lithograph of the Fairgrounds Circle replete with idealized renderings of the fairgrounds buildings and local scenery. The upper register shows the Fairgrounds Circle from the eastern or gateway side with its substantial out buildings and well manicured lawns. The lower register shows the embankment from directly opposite the gateway with the horses coursing around the interior of the earthwork as the throngs of race fans cheer on their favorite steed. In the lower right margin it reads sketched on site by H.P. Whinnery. The image detail below shows what might very well be Mr. Whinnery himself sitting on astump, sketching a picture of him sketching a picture of the horse race. 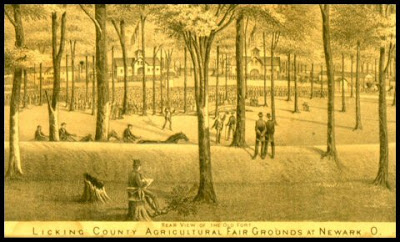 All this was enough to cause the director of the BAE, W. H. Holmes, to warn ominously that if the present use of the Great Circle as a fair grounds is not discontinued, a few generations will witness its practical demolition. For a variety of reasons Holmes warning seemed to fall on deaf ears as the extreme use of the site would continue unabated well into the 20th century. Between 1896 and 1924 R. C. Lingafelter operated an amusement park enterprise at the Great Circle known as Idlewilde Park, sort of a forerunner of the Kings Island/Cedar Point theme parks of today.

According to the advertising broadside below Idlewilde Park attractions included a switch back railroad (a very early roller coaster) as well as a Ferris Wheel, a dance pavilion, shooting galleries and other amenities and amusements of the day. The final image is of Idlewilde Park’s ornate main entrance facing the east circa 1900. It was located immediately in front of the earthworks gateway entrance about where the site’s museum is located. Note the fine Victorian fashions. 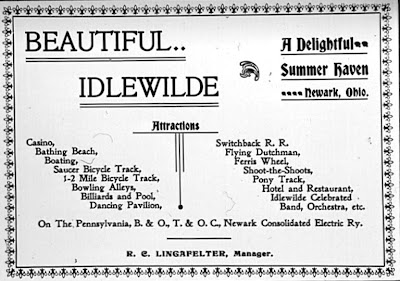 Apparently Idlewilde Park was the place to see and be seen! Eat your heart out Paris Hilton. Idlewilde Parks star began to fade about the time of the First World War as the popularity of nearby Buckeye Lake Amusement Park increased. Idlewilde Park finally closed it’s gates in 1924. The Licking County Fair like so many other things began to fall on hard times with the onset of the Depression years. The last Licking County Fair to be held at the Great Circle was in 1933. 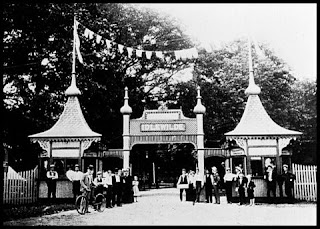