The question of the extent to which cultural developments in ancient Ohio were influenced by the more extravagant and certainly more widely known civilizations of Mesoamerica frequently comes up in popular and, though less commonly, scholarly discussions. I addressed this perennially fascinating and contentious question in my regular Archaeology column for the Columbus Dispatch, but it’s such a huge and consequential topic that I wasn’t able to do it justice in the space I’m generally allowed. This blog, therefore, is a sort of continuation of the column.

The usual reasons people assume there was a connection relate to perceived similarities in architecture, ornamentation and artistic representations between the Hopewell and various more or less contemporary Mesoamerican cultures. I address some of these arguments in my column, but had to leave out a compelling reason for thinking there was no important Hopewell-Mesoamerican connection. Although there are no insurmountable, or even terribly daunting, geographic barriers separating the regions and people could have gone back and forth between these regions by boat or on foot engaging in trade or cultural exchanges of one sort or another, there is, so far, a nearly complete absence of compelling evidence for such connections.

Ohio’s Hopewell culture invested enormous energy in obtaining exotic raw materials from which to craft their evocative ritual paraphernalia (see illustrations for examples). These materials were brought to Ohio from as far east as the Atlantic coast and from as far west as the Rocky Mountains, but no demonstrably Mexican stuff has ever been documented at even a single Hopewell site in Ohio. The Hopewell obtained obsidian, a black volcanic glass, but none of it has been identified as Mexican obsidian. It all came from either Wyoming or Idaho. Turquoise and jade were important materials in Mesoamerica, but not so much as a bead of either material has ever been found at an Ohio site. If the Hopewell artisans could have gotten their hands on these materials, it’s hard to imagine a reason why they would not

have put them to use in their magnificent and iconic jewelry and sculpture. It’s a frequently cited maxim that the absence of evidence isn’t evidence of absence, but the lack of any definitively Mesoamerican materials in the small mountains of exotic material acquired by the Hopewell is, in my view, at least strongly suggestive that no important interaction occurred between these distant regions. It could have, but so far there is no convincing evidence that it did in fact happen. Nevertheless, it remains an open question and an important one that has been avoided by serious scholars in recent decades.

The recent book Gulf Coast Archaeology: the southeastern United States and Mexico, edited by Nancy Marie White, brings together a diverse group of scholars from north and south of the Rio Grande to explore the question from a variety of perspectives. I highly recommend this book to your attention if you find the subject of enough interest to have read this far into a long blog posting. 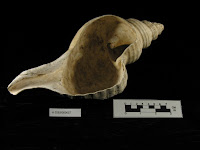 Finally, it’s worth noting that modern scholars largely have tended to avoid this question because of the subtle and sometimes baldly explicit ethnocentrism (or even racism) inherent in the claim that many of the achievements of the Hopewell were borrowed from their more “civilized” neighbors. The underlying message being that the eastern Woodland Indians could not, on their own, do what they did. This is only one step away from the more outrageously stupid claims that all of America’s civilizations ultimately owe their glories to contact with ancient Egypt, Israel or the supposedly lost Atlantis. The Hopewell people developed a unique and rich culture in southern Ohio. The cosmopolitan reach of the Hopewell “interaction sphere” continues to surprise us and their knowledge of their neighbors’ affairs was almost certainly greater than we suspect. Yet their achievements are their own and we have no reason to look beyond the Ohio Valley (and maybe Illinois) for the genesis of this remarkable cultural florescence.