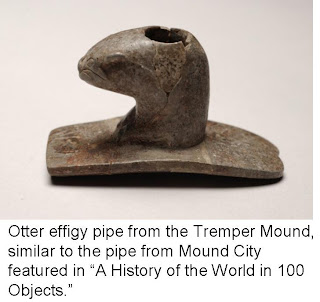 A Hopewell animal effigy pipe from the Mound City site in Chillicothe is featured alongside iconic artifacts, such as the Rosetta Stone and a giant stone head from Easter Island, as one of the 100 objects selected by Neil MacGregor, director of the British Museum, to tell the “History of the World.”

The Mound City pipe is one of more than 200 such pipes discovered by Ephraim Squier and Edwin Davis in 1846. The pipes had been broken and placed together in a ceremonial deposit beneath the floor of a structure used for ceremonies. At some point, when the ceremonies were completed, the structure was burned down and the site was covered with a mound. The Squier and Davis collection, which includes the remarkable pipes, is in the collections of the British Museum. William C. Mills, Curator of Archaeology for the Ohio Historical Society, discovered a similar deposit including more than 80 effigy pipes in 1915 when he excavated Tremper mound in Scioto County. Tremper Mound was built on the site of a long, roughly rectangular timber hall with three, small rounded chambers at one end. Mills found the pipes in a deposit in the floor of the middle of the three chambers. As at Mound City, the pipes had been broken and deposited on the floor of the structure, which was then burned and buried beneath the large mound.The Tremper pipes are featured in the Ohio Historical Society’s new exhibit “Following in Ancient Footsteps.”

Here is a link to the episode of the BBC radio program about the Mound City pipe: http://www.bbc.co.uk/programmes/b00sfgx2