A HAPPY DISCOVERY IN BELLEVUE

A HAPPY DISCOVERY IN BELLEVUE 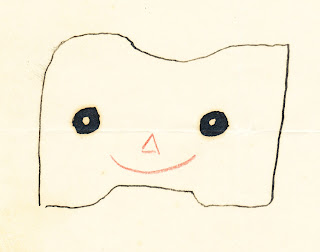 In early October of 1936, an 8th grade geography class from Bellevue, Ohio wrote to the Ohio Historical Society for help in identifying an “Indian tool or relic” that had been found in the area. They described it as “very smooth and gray” with two holes bored in it. They included a rough drawing of the object for reference.

“We have tried in several classes to try and discuss for what it is used,” but no one in Bellevue could come up with an explanation. So they wrote to the Ohio Historical Society to see if anyone here could identify the strange object.

Richard Morgan, then our Curator of Archaeology, responded that while “it is rather hard to tell what some of the ancient Indian objects were used for” the Bellevueartifact was a gorget, which was “probably either fastened to the clothing or else worn suspended around the neck as part of a necklace.”

He did not comment on the Happy Face, which someone had added to the drawing suggesting that it was Morgan himself who had added the face as a doodle.

Based on the outline drawing provided by the Bellevuegeography students, the slate gorget appears to be damaged. It is hard to guess at its original form, but it may have been either a Bi-concave Gorget, in which case it would have been made by an artisan of the Adena culture (circa 600 B.C. — A.D. 100), or a Reel-shaped Gorget, which was a form favored by the Hopewell culture (circa 100 B.C. — A.D. 400). 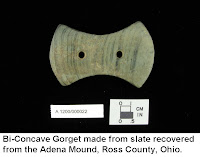 Thanks to Emily Riggins and Sara Nuber Thomas, interns with the Archaeology Unit for their re-discovery of this delightful vignette in the OHS Archaeology archives.