A Foxy Villager! Wild in the City Part III 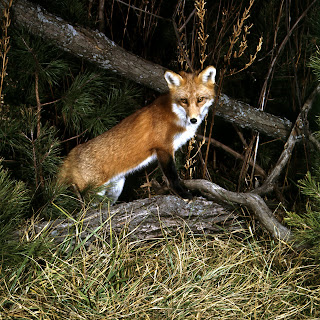 In mid to late January there were several sightings of Red Foxes on the grounds of the Ohio Historical Society, including outside the windows at the Archaeology Park/Bird Sanctuary and the Ohio Village. The greatest number of sightings seems to have been foxes going to or coming from the Ohio Village. While most staff were thrilled with these sightings, a few raised a question concerning staff and visitor safety.

Red Foxes typically weigh in at 10 to 15 pounds, about the size of a house cat. Of course, with longer legs and a thick coat of fur and long fluffy tail, they tend to look bigger, especially in winter with a prime fur coat. In more rural areas they quickly learn to stay out of sight and generally fear people. In urban areas they gradually become accustomed to some activity especially when that activity stays behind windows or even inside of cars. Farmers often note that wild animals ignore them while on a tractor or in a truck but take off immediately when they get off the tractor or exit the car. Foxes are most active at twilight times and during the night, but with the shortened winter days it is not uncommon to see them during daylight hours. We are also now in fox breeding season which explains why one of the sightings near the business office this week, was of a pair headed toward the Village.

Foxes eat a wide variety of food with lots of mice and rabbits on the list but also plant material. Given the opportunity, a bird or even garbage is not out of the question. People are definitely not on their menu. They are excellent mousers and may help keep down the mouse population in the Village. I have seen camp foxes in national park campgrounds (especially further north) where they sneak around looking for handouts something like raccoons and may become quite tame. In most situations, however, they avoid people.

Since sending an e-mail to all staff sharing some insights on foxes, fox behavior, and the limited danger from foxes, I have heard from several other folks about sightings in and around urban/suburban areas of Columbus. If you see a fox, wonderful! Enjoy the experience. But never try to feed any wild animal, and avoid leaving any food outside. Food left outside for pets often attracts wild animals like fox, raccoons, opossums and rats. Feeding may make them loose their natural fear of people and even become aggressive. Garbage cans need to have tight fitting lids. A few simple precautions avoid problems.

Rabies is generally quite uncommon in foxes. In the U.S., cases of rabies in tested wild animals showed 38% in raccoons, 28% in skunks and only 6% in foxes. Note this was not a study of free-roaming animals but of animals trapped because they were suspects. In the total population the percentages may be even lower. In sixty plus years of roaming woods and fields seeking out wild animals Ive only seen a single raccoon that acted like it might be rabid (turns out it was distemper).

As said before, most fox will avoid close contact with any person. More tame wild ones might not immediately run, but will not let you get close. In the unlikely event that you observe behavior changes which might include acting aggressive toward people, or acting lethargic, weak or sickly, give them a wide berth, and contact authorities. Otherwise, just enjoy the neat experience if you should be so lucky!