A Brief History of the Turkey

The centerpiece of the Thanksgiving meal in the U.S. was once threatened with extinction. 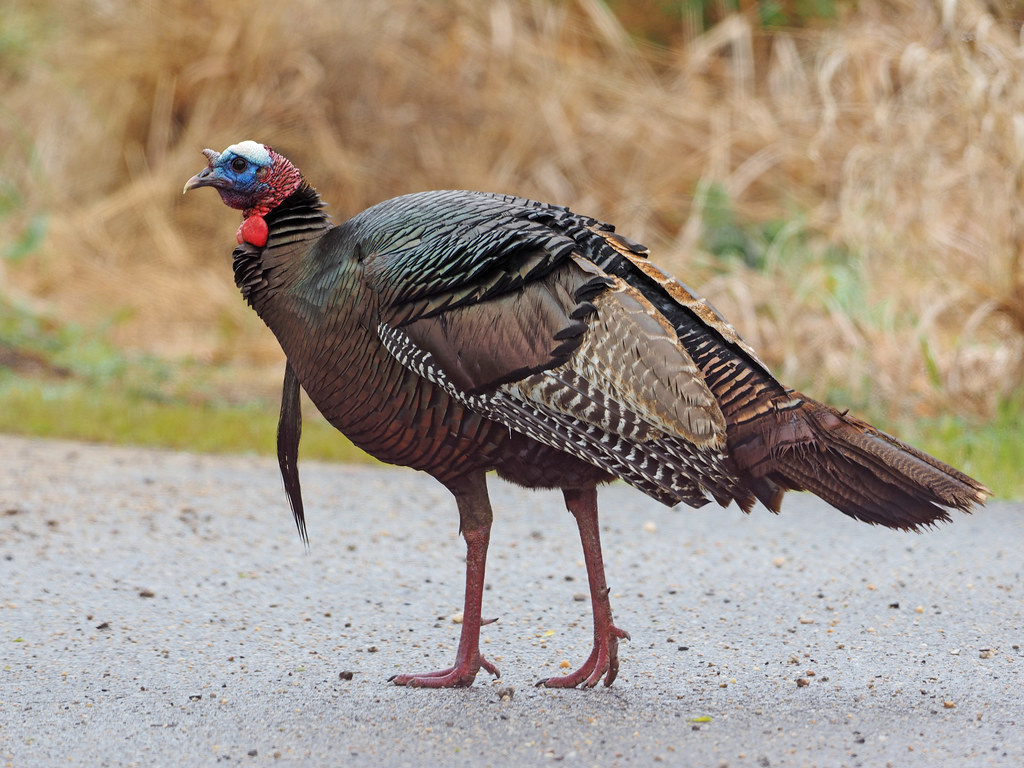 Europeans exploring the New World in the 1400s had never seen anything quite like the turkey.

The turkey’s scientific name, Meleagris gallopavo—an amalgamation of Greek and Latin root words amounting to “guineafowl rooster peacock”—reflects this confusion; however, the three species for which it is named are only distantly related. It’s been variously suggested that its common name in English sprung from the colonizer Christopher Columbus himself, after the noise it makes (“tuka, tuka”); a supposed Native American name of “firkee”; trade routes that brought a similar bird to Europe from the country bearing the same name; and the Hebrew tukki, which means “big bird”.

Anyone who has encountered a flock of wild turkeys strutting in a field or awkwardly running across a rural road can attest to their somewhat goofy grandeur. They nest and forage on the ground and prefer to get around on foot, but they don’t hesitate to fly and frequently roost over 15 meters up in the tree canopy. They can even traverse large bodies of water by swimming.

Adaptable and hardy, 5 subspecies of Wild Turkey inhabit various biomes in North America and occur in every state except Alaska. They flourish in any kind of open forest with scattered clearings, from the coniferous forests of the Southwest, the Everglades of Florida, and the Great Plains, to our familiar temperate deciduous forests of the East. They have even been introduced to Hawaii. In the wild turkeys eat tree nuts, berries, seeds, buds, vegetation, and arthropods, and will take an occasional small vertebrate if the opportunity arises. Along with the Muscovy Duck, the Wild Turkey is one of only two birds native to North America that have been domesticated. Its close relative, the smaller but stunning Ocellated Turkey (M. ocellata), occurs only in Yucatán and northern parts of neighboring Belize and Guatemala. It is listed as Near Threatened due to deforestation of their rainforest habitat. (Check out this awesome video of a male trying to impress a flock of females.)

The history of turkey domestication goes back nearly three thousand years. Native Americans first domesticated turkeys not for their meat, but for ritual and religious purposes—in what is now central Mexico around 800 B.C., and again in what is now the southwestern U.S. by ancestral Pueblans around 200 B.C. Although they kept several distinct breeds, the ancient Pueblans didn’t incorporate domesticated turkey into their diet until around 1100 A.D. A more recent finding of M. gallopavo bones at a Mayan site in Guatamala (over 400 miles south of their native range) indicates that the Maya people were keeping domestic turkeys around 300 B.C.

Now extinct in the wild, there is evidence that this Aztec subspecies (M. g. merriami) is the turkey first brought to Europe by Spanish explorers, perhaps as early as 1500. The turkey gained popularity and spread across Europe, and many different breeds were developed over the next century. The domestic turkey was then brought back to the U.S. from England with the colonists in 1608. Some crossing with their wild Eastern counterparts did occur, whether intentionally or not, and the Broad-breasted Whites we buy at the store today are their descendants. Contrary to our modern traditions, there is no evidence that turkey, either wild or domesticated, was served at the first Thanksgiving in 1621. In Ohio it became popular for Christmas dinner by 1787, but the recommendation of turkey as the Thanksgiving meal’s centerpiece can be almost entirely attributed to a decades-long marketing campaign by popular magazine editor (and composer of “Mary Had A Little Lamb”) Sarah Josepha Hale.

Hale was a savvy businesswoman, the 1800s version of Martha Stewart, and she relentlessly publicized today’s traditional Thanksgiving recipes in magazines and cookbooks. She also petitioned various presidents over a 36-year period to make Thanksgiving an official holiday—not only to champion her ideas of what the feast should be, but to designate a day for the nation to give thanks for its blessings. Her request was finally granted by Abraham Lincoln in 1863, and the third Thursday in November finally became the official Thanksgiving holiday.

Meanwhile, much like the Passenger Pigeon and the American Bison, the once widespread and numerous Wild Turkey was seen by white settlers as an inexhaustible resource to be exploited. In Hale’s time they were killed by the hundreds and sold for a quarter, and by 1880 the turkey had disappeared from Ohio entirely, and was declared extirpated from the state in 1904. A species account written in the midst of this decline (the 1830s) by naturalist John James Audubon in his life’s work, The Birds of America, somewhat fancifully describes the turkey’s known habits and distribution at the time, and can be found here.

But it wasn’t just over-hunting that nearly led to the Wild Turkey’s demise—it was habitat loss. Deforestation and conversion of land to crops on a massive scale, and the loss of nut-bearing trees—particularly the American Chestnut (Castanea dentata)—was the main driver. 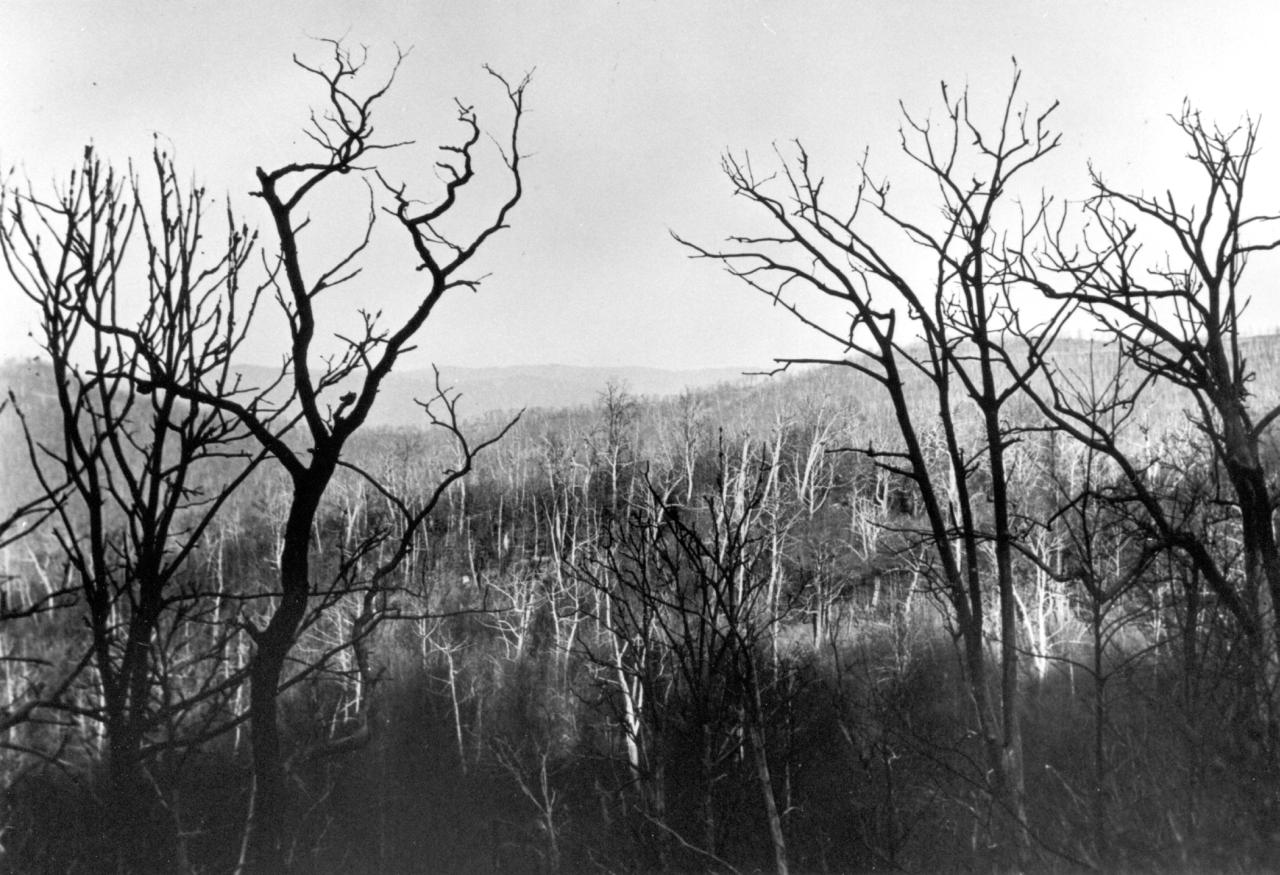 Results of the American Chestnut blight in the Chattahoochee National Forest in north Georgia, 1930. ChattOconeeNF, CC BY 2.0 (https://creativecommons.org/licenses/by/2.0), via Wikimedia Commons

The majestic American Chestnut fell to the axe, but after 1904 it fell to a fungal blight (Cryphonectria parasitica). Introduced from Asia on two chestnut species brought over as ornamentals to the Bronx Zoological Park, the fungus nearly wiped out our native chestnut. Today, only a few pockets of mature trees persist in isolation. Stumps all over the Appalachians continue to resprout and grow into small trees until the fungus kills them, but efforts at bringing the chestnut back to our forests are underway.

The turkey’s decline, as well as that of the Passenger Pigeon, closely follows that of the chestnut, which produced massive amounts of mast for many other animals, including bison, deer, raccoons, squirrels, skunks, and opossums (and humans too!). By the 1930s, the turkey was also reduced to a few isolated pockets that clung to survival in the most remote forest locations. The entire population dwindled to around 30 thousand.

Following the Dust Bowl and Great Depression, many farms were abandoned and allowed to regenerate back into forest. By the time of the Second World War, this regeneration was well underway. The stately chestnuts were gone, but oak, hickory and maple were maturing in its place, and new conservation bills helped the turkey’s recovery. One such bill, the Lacey Act of 1905, prevented the interstate sale of taken wildlife; another, The Pittman–Robertson Act of 1937, taxed the sale of sporting goods and ammunition (thus generating conservation funds for wildlife recovery).

Pen-rearing initiatives in the 1940s largely failed due to the turkey’s tendency to imprint on its human caregivers and rampant disease; it was such a flop that it’s been suggested that it slowed the turkey’s recovery by as much as two decades. Reintroduction efforts in Ohio during this time also failed. Capture-and-release campaigns in the 1950s and beyond reintroduced the turkey back into its former range, and was much more successful. The turkey flourished, and by 1990 there were an estimated 3.5 million birds nationwide. No other game bird has responded so well to the efforts of game managers. Today, the turkey population has become abundant enough in Ohio to support hunting throughout most of the state once again – although the bag limit is only one of either sex in either season (check the Division of Wildlife’s current hunting and trapping regulations here).

One of the turkey’s claims to fame is that Benjamin Franklin, in a letter to his daughter dated 26 January 1784, supported its becoming our national symbol; but actually, he only criticized the selection of the Bald Eagle, and mentioned in passing that he was glad that people thought the eagle looked too much like a turkey.

“Others object to the Bald Eagle, as looking too much like a Dindon, or Turkey. For my own part I wish the Bald Eagle had not been chosen the Representative of our Country. He is a Bird of bad moral Character. He does not get his Living honestly. You may have seen him perched on some dead Tree near the River, where, too lazy to fish for himself, he watches the Labour of the Fishing Hawk [Osprey]; and when that diligent Bird has at length taken a Fish, and is bearing it to his Nest for the Support of his Mate and young Ones, the Bald Eagle pursues him and takes it from him.

With all this Injustice, he is never in good Case but like those among Men who live by Sharping & Robbing he is generally poor and often very lousy. Besides he is a rank Coward: The little King Bird not bigger than a Sparrow attacks him boldly and drives him out of the District.

He is therefore by no means a proper Emblem for the brave and honest Cincinnati of America who have driven all the King birds from our Country… I am on this account not displeased that the Figure is not known as a Bald Eagle, but looks more like a Turkey. For in Truth the Turkey is in Comparison a much more respectable Bird, and withal a true original Native of America…  He is besides, though a little vain & silly, a Bird of Courage, and would not hesitate to attack a Grenadier of the British Guards who should presume to invade his Farm Yard with a red Coat on.”

This Thanksgiving, consider giving thanks that the wild ancestor to the bird on your table didn’t go the way of the dodo!