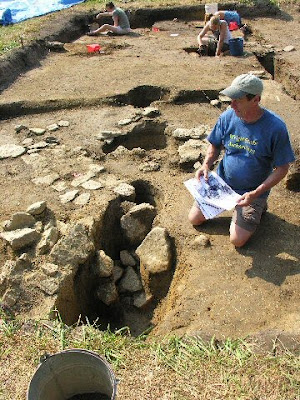 A couple weeks ago we visited the Dr. Robert Riordan (photo 1) at the Wright State University field school at Fort Ancient. OHS archaeologist Bill Pickard spoke to one of the student supervisors, Jeremiah Stager and the following is Bill’s account of the field work as of mid July.

According Jeremiah Stager the sub surface architecture near the periphery of the circle is complex and difficult to decipher. Basically the area consists of a series of trenches, intermittent limestone pavements, posts holes and pits that often cross cut each other. These features seem to have originated during different episodes of use, construction, reuse and more construction. to make sense of what has been uncovered so far is certainly beyond simply connecting the dots, so to speak. Those artifacts recovered so far have consisted of pottery shards, flint flakes and broken bladelets. There has also been the occasional small, well used projectile point but nothing of a major artifact find as is often thought typical of Hopewell Sites.. Remote sensing beyond the limits of the circle seem to indicate a series of short shallow trenches that radiate out from the circle forming a pattern similar to a close-up of a finger print.. What does it all mean? That hasnt been quite decided as of yet. It will take many more seasons of field work to complete the big picture. The process of archaeology is often referred to as a puzzle that must be assembled piece by piece to create the big picture. That is certainly the case at the Moorehead Circle. What is typical and in common with most Hopewell sites is that a lot of hard work and dedicated labor went into its construction and no less an effort will have to be made to make sense of whats beneath the surface of the ground at Ft Ancient.