Shown here is Ed Moreland at a recent knapping demonstration at Flint Ridge State Memorial, one of several held on Saturdays throughout the summer. 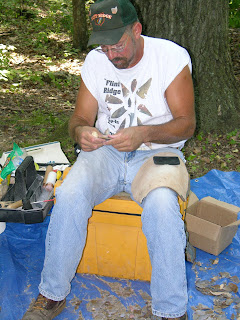 Ed is a skilled and accomplished artisan and is seen here turning a raw or un-heat treated piece of Flint Ridge chalcedony (acquired off the State Memorial property) into the beautiful Dovetail spear point seen in the second inset.

If you were unable to attend any of these small but informative demonstrations there is still the grand-daddy of them all to take place in a couple of weeks. From August 31 through September 2, 2007 the Flint Ridge Lithic Society, in cooperation with the Ohio Historical Society, will hold its annual Flint Knap-In and Stone Tool Technology Show at Flint Ridge State Memorial. As was the case for thousands of years, the hills and woods around the State Memorial will once again ring with the musical sound of hammer stone on flint as folks from all over the country will get together at this ancient quarry site to see old friends and make new and practice the ancient art of knapping or chipping arrow heads and spear points from flint. 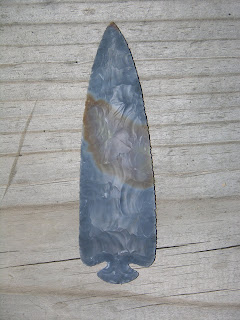 Although the digging of flint on the State Memorial property is prohibited there will be plenty of flint, obsidian and other raw material suitable for knapping available from sources as far away as Australia. It is an excellent opportunity to see how things were made in the very old times and how some modern practitioners have elevated what was once a subsistence skill to an art form. The annual Flint Ridge Knap-In is one the largest events of its type in the country and over 100 knappers will be on hand to demonstrate their craft. If you feel so inclined, there is always room for anyone else who just might want to give it a try. Additionally there will be demonstrations of other traditional crafts and skills including spear throwing with a device known as an atlatl. An atlatl is a handle-like device that allows a person to throw a spear further and at a greater velocity than with just regular arm motion. It was perhaps THE weapon of choice in prehistoric times in both the Old World and in the Americas and used extensively for hunting and warfare before the advent of the bow and arrow.
On Saturday September 1, an archaeologist from the Ohio Historical Society will be on hand at the museum to identify artifacts and other objects brought in by the public. So if you have an arrow head you dug out of your garden or a few things grandpa found while plowing, here is a chance to find out about them.

If the weather cooperates it is always a fun and rewarding event. It’s even fun when it does rain. Hope to see you there!