December 29, 1890, is a date well known among Native American people. It marks an event slowly becoming better known across the more general study of United States history. Dee Brown, the Western historian borrowed a memorable phrase for a book title from Stephen Vincent BenÃ©ts poem American Names, which closed with the line “Bury my heart at Wounded Knee”. That popular history told a story of the American West from the perspective of Native Americans, using the events of the Wounded Knee Massacre as a lens to refocus the narrative on the Indian experience.

On Dec. 29, 1890, at least 150 Lakota Sioux (some argue it was closer to 300) were shot down in a panic by soldiers of the Unites States Armys 7th Cavalry, of whom over 30 also died, mostly at the hands of their own 500 strong fellow troopers gunfire arrayed, as they were, in a circle around the 350-plus Indians, mostly women & children with a few older men and a hundred or so younger warriors. The first curator of archaeology for the Ohio Archaeological and Historical Society (now the Ohio Historical Society, or OHS) was present at the Pine Ridge Reservation and near Wounded Knee Creek in 1890. Not at the massacre, Warren K. Moorehead, just 24 years old, was present at Pine Ridge for the preceding two months as a correspondent for the New York based The Illustrated American. The Illustrated American hired young Moorehead because he had just published a well-reviewed novel of life on the Pine Ridge Reservation, entitled Wanneta, the Sioux. A story that we might call a young adult novel today. The story echoes a popular contemporary best-seller, Ramona by Helen Hunt Jackson, better known for her non-fiction polemic A Century of Dishonor about mistreatment of Native American people across the continent (another book Moorehead would adopt as a model 24 years later). Wanneta did not sell quite as well as Ramona, but respectably enough to gain a lecture tour across the east coast in the fall of 1890, and an offer to go find out more about what was starting to show up in wire service accounts out west as the Ghost Dance. Moorehead had the advantage of having just been on the same ground where the Ghost Dance was reported as most active, spending the previous February with a fascinating character named George E. Bartlett, a U.S. Marshal for Pine Ridge and a city west of there already infamous as Deadwood, South Dakota. Bartlett had worked as a sales representative for the gunpowder company owned by relatives of Warren Moorehead (his King family relations from Xenia, this apparently being the reason he and Bartlett knew each other in the first place), and also ran a small trading post of his own on a creek through part of the Pine Ridge Reservation.

From the wild days as a Pony Express rider and then Marshal in Deadwood, Bartlett had picked up the Indian name Huste, which was explained to be a dialect word for . . . Wounded Knee. Was the creek already called that, or did Bartletts nickname literally name the location? We will probably never know for sure. What we do know from Mooreheads papers and journals, held at the OHS Archives, is that Bartlett/Huste had invited the young man out in February, had taken him around to the camps and settlements of the Lakota Sioux across the Nebraska/South Dakota border, and after the relative success of Wanneta had continued to suggest Moorehead come out again to write about this Ghost Dance phenomenon. With the support of an editor named Minton at The Illustrated American, Moorehead got a ticket from New York to Chadron, Nebraska where Bartlett owned a ranch, and quickly found himself welcomed in the camp of Red Cloud, a greatly respected Lakota leader. Moorehead never claimed to speak any of the Lakota dialects he encountered, but the articles he later wrote included a variety of Indian words, and of course his friend and guide George Bartlett spoke a number of Sioux tongues quite well. 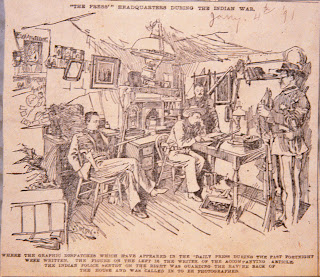 After almost eight weeks of travel and camping among the various settlements across the Pine Ridge area, he was called into the headquarters of Gen. John R. Brooke, commanding officer of the Department of the Platte. According to Mooreheads journal, Brooke informed him that as he was the only correspondent who spoke the hostiles language, and was accepted enough to overnight in their camps, he was considered a liability to the Army as they tried to bring order to the Pine Ridge situation: so two soldiers would escort him directly to his quarters, watch him pack, and take him to the next train east. As the first shots rang out along Wounded Knee Creek on Dec. 29, 1890, Warren Moorehead was fuming in a train car, writing out his account of the meeting with Gen. Brooke the day before. As Col. Forsyth and the 7th Cavalry were holstering their weapons and dismantling the Hotchkiss guns that had contributed so much to the one-sided slaughter, Moorehead still knew nothing of what had happened behind him. But not for long.

After a hurried New Year visit to his family in Xenia, Moorehead pressed on to Washington, D.C., where he carried the case of Red Cloud and the Pine Ridge Lakota all the way to the White House, arguing that neither the national interest nor simple justice were served by the poor treatment he had seen, let alone by a massacre such as everyone in the east was now hearing about, and seeing from early photographs (some of which may have come from top-of-the-line equipment Moorehead left behind for his colleagues). After having heard only vaguely sympathetic statements from congressional leaders and President Benjamin Harrison, Moorehead went on to New York, telling his tale to Minton and the Illustrated American staff. They opened up the magazines pages and art department for what their correspondent had to tell, and he published half-a-dozen long pieces praising the moral and personal character of Red Cloud and other Indian leaders he had met, explaining their way of life as it had changed since the coming of the white man, and doing his best to present the Ghost Dance in a reasonable light. Of the Wounded Knee Massacre he could say little, but he closed his series by tearing into the system of Indian agents and allocations, and asking for justice from the U.S. government to the much abused, often maligned Lakota and similarly situated tribes in the west.

On reading Mooreheads righteous rant, the wonder isnt that it took almost twenty years for him to be named to the federal Bureau of Indian Commissioners, but that he was invited at all. The bulk of Mooreheads career was ahead of him in the wake of Wounded Knee. His youthful wanderings and relatively random diggings at Fort Ancient and in Licking & Muskingum counties left a visual record of pillage and unmistakable evidence of an emphasis on personal collecting that would dog his reputation down to the present day. What is very clear in his writing about Native Americans, both long ago in the archaeological record, and today in his United States, is that Warren King Moorehead saw things differently after the events of 1890. He took away from Wounded Knee not only an amazing news story, but a strong sense of the connection between the stones and bones he had so casually juggled in his teenage days, and the proud people whose homes he had shared. His approach to the material culture he now excavated in Ohio was rooted in a living relationship to Native American people. There was both more respect for, and a passion for justice to the descendants of the people who had built a place like Fort Ancient.

Over the next 49 years, there would be few more vocal and active advocates for Native American justice than Warren King Moorehead. In print, in speeches, in lobbying up and down the corridors of Washington, and in exposÃ©s of corruption and mismanagement, Moorehead was tireless in his efforts to speak for Indian people without an advocate or a voice in the government, express deep concerns about the Dawes Act and its application to Indian landholdings, conducting hearings in 1911 investigating bribery and redirection of funds in the White Earth Reservation in Minnesota, writing a book length study on his own in 1914 of the national situation regarding BIC management, and supporting the independent Meriam Report of 1928 to the BIC.

Moorehead was only formally silenced in 1933 by the complete closure of the Bureau of Indian Commissioners, and their re-constitution as a Bureau of Indian Affairs without him, but his friend John Collier was named the new Commissioner of Indian Affairs of what is better known today as the BIA. No longer a commissioner, he kept writing until his death in 1939 on respect and fair treatment for Indian nations across the US. How that passion, beginning at Wounded Knee Creek, shaped his archaeological practice in the years to come, will be a fascinating subject for further study and review.