Special thanks to Jemma Evans-Cleary and Vara Mehra, students at the Columbus School for Girls, for this terrific guest blog post!

The fourth grade students at Columbus School for Girls have been working towards making a bill become a law in the state of Ohio. They are hoping that Ohiowill vote to make the Adena Pipe the official state artifact. The students were particularly interested in the story of finding the Adena Pipe by one of Ohios archeologists, named William C. Mills. He found the pipe on Thomas Worthingtons property called Adena in Chillicothe. Thomas Worthington is known as the father of Ohios statehood. He was our sixth governor. The city of Worthington and a high school in Worthington were named after him. 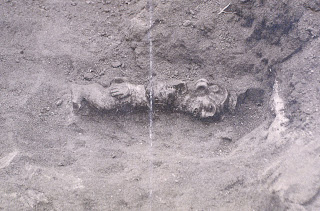 Two years ago, the fourth grade classes researched Ohios prehistory and wrote letters to their Rep-resentatives and Senators to start the process of writing the bill. Unfortunately, it didnt pass because of it being an election year and they were busy getting new Senators and Representatives adjusted to their jobs. Now, the current fourth graders have been busy writing letters to their Representatives and Senators. They went to the Ohio Statehouse. The students brought their testimony and presented their information to the House of Representatives committee. They had a hearing to defend their reasons on why the Adena Pipe should become the state artifact. Here are some of their reasons: the Adena Pipe is 100% Ohio made. It is made from Ohios pipestone that is only found in Ohio. The pipe represents the culture of Ohios prehistoric Adena people. It is publicly, not privately owned, and should be protected. The bill was named HB501 and it passed the committee.

The next steps are to bring the bill before the Ohio Senate and to the Governor for a vote. The students are very optimistic that this bill will actually become a law. The fourth graders are certainly learning first-hand the process of how a bill becomes a law.