Have you ever wanted to volunteer for an archaeology project? See the following information about work being done here in Franklin County.

Archaeology Volunteers Wanted for the Deardurff House Project in Franklinton 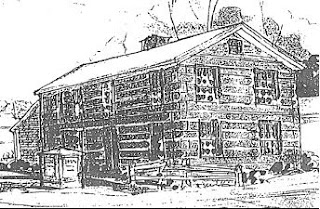 The Deardurff House, located at 72 South Gift Street in the Franklinton neighborhood of Columbus, is the oldest known structure in Franklin County to still be located on its original foundation other older structures have been moved from their original location (Figure 1, artists rendition of the house ca 1860). Public records suggest that the Deardurff House was built in 1807; a mere four years after Ohio became a state. The 2-story, log cabin portion of the house was built by David Deardurff, the 21-year old son of Abraham Deardurff, one of the first settlers of Franklinton. The Deardurff family arrived in Franklinton from Pennsylvania in 1798. The front room of the original log cabin was used as a post office in the early 1800s. It appears that the rear addition was added ca. 1860. Between 1815 and 1950 the house was lived in by many different families. The property was listed on the National Register of Historical Places in 1973.

The owner of the property, Mr. Walt Reiner, has committed to restoring the house in a historically accurate manner. Prior to the restoration work, Mr. Reiner wishes to have archaeological investigations undertaken in an attempt to recover any additional information about the building and its past occupants. Hardlines Design Company, an architecture, planning, and cultural resources management firm based in Columbus, submitted a proposal to conduct this work that included the donation of some labor and all materials, and the use of volunteers in an effort to maximize neighborhood and student participation in this interesting investigation. Fieldwork is just the first step of the project; artifact analysis and report preparation will continue during 2011.