THE NEWARK EARTHWORKS – A PLACE OF PILGRIMAGE

THE NEWARK EARTHWORKS – A PLACE OF PILGRIMAGE

Newark Earthworks Day 2009 is devoted to the theme of pilgrimage. Why do we think pilgrimage had anything to do with the ancient earthworks? There are four lines of evidence that point to the importance of pilgrimage for our understanding of the Hopewellian achievement: the enormous size of the earthworks, the vast reach of the Hopewell “interaction sphere,” the presence of sacred avenues that link one earthwork to another, and Native American oral traditions from the Maya to the Creek and Delaware that speak to the role of pilgrimage in indigenous American cultures.

The Newark Earthworks comprise the largest complex of geometric earthworks in the world. It originally extended across more than 4 ½ square miles and included a square enclosure that could have held the Great Pyramid of Egypt, an Octagon in which you could fit four Roman Colosseums, and a Great Circle that held the Ohio State Fair in 1854. This giant complex was built by a people that lived in small agricultural communities that have been compared to homesteads for extended families. Why did they need ceremonial spaces built on a scale to match the grandest civilizations of the ancient world? Because they weren’t built only to serve the needs of the local populace. 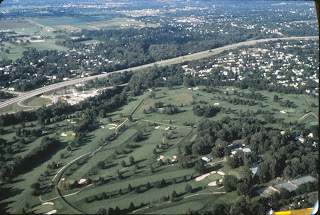 Aerial view of the Octagon Earthworks at Newark, Ohio

In addition to their monumental earthworks, the Hopewell culture is best known for the magnificent works of art they crafted from materials gleaned from the ends of their world: copper from the upper Great Lakes, mica from the Carolinas, shells from the Gulf of Mexico, and obsidian — a black volcanic glass — from the Rocky Mountains. These exotic materials may have come to Ohio as valued commodities in a network of trade, but we have little evidence for what Ohio’s Hopewell traders might have given in exchange. Knives and bladelets made from the uniquely beautiful Flint Ridge flint, mined from quarries less than 10 miles from Newark, are found scattered throughout eastern North America, but not in the quantities that would suggest a fair trade for the bushels of mica and copper found at Ohio Hopewell sites.

Perhaps the giant earthworks were pilgrimage centers, like Mecca or Jerusalem, and the exotic materials flowed into these places as offerings of supplication or thanksgiving brought by pilgrims from all over eastern North America. According to Jean and Joyotpaul Chaudhuri, in their book A sacred path: the way of the Muskogee Creeks, the Creek Indians of the Southeastern United States have oral traditions of traveling northward on “spiritual journeys,” or seasonal pilgrimages, to “special mounds” in Ohio. It is possible that Newark was one of these special earthwork centers.

Caleb Atwater speculated in 1820 that the parallel walls of earth that extended from Newark’s Octagon to the southwest went at least thirty miles. He referred to reports of “walls having been discovered at different places, probably belonging to these works,” between Newark and Lancaster. In 1862 James and Charles Salisbury traced the walls from Newark for six miles “over fertile fields, through tangled swamps and across streams, still keeping their undeviating course.” They suggested the road might have linked Newark with the earthworks at Circleville or Chillicothe.

If this “Great Hopewell Road” continued on a straight course, then it would have led directly to Chillicothe, the center of Hopewell culture. Perhaps this road was a holy pilgrim’s path like similarly long and straight roads built by the Mayan culture in Mesoamerica, which they called sacbeob, or “white roads.” The people of the Hopewell culture may have followed such roads to the great earthwork centers bringing offerings of copper or mica as gifts to the supernatural powers invoked by the monumental geometry of these sacred places.

The Rev. Albert Seqaqknind Anthony, a Delaware Indian, told the 19th century anthropologist Daniel Brinton that, “in the good old times,” before any European had landed on their shores, the Delaware had “a string of white wampum beads…which stretched from the Atlantic to the Pacific, and on this white road their envoys traveled from one great ocean to the other, safe from attack.” It is controversial to attempt to link recent oral traditions to ancient archaeological sites, but it’s fascinating to speculate that this Delaware tradition might be a distant memory of Hopewellian sacred roads. The “white road” of sacred wampum may be a metaphor for actual roads, like the “white roads” of the Maya, on which pilgrims once walked to bring their offerings to these places of breath-taking grandeur of which Newark was, by far, the grandest. The Hopewell roads certainly did not extend from the Atlantic to the Pacific, but the offerings deposited at these earthwork centers are made from materials obtained from the Atlantic to the Rocky Mountains, so perhaps the tradition does not reflect much of an exaggeration.

For more information about the Great Hopewell Road and the role of pilgrimage in Hopewell society see the following articles. Lepper, Bradley T. 1996 The Newark Earthworks and the geometric enclosures of the Scioto Valley. In A View From the Core: a synthesis of Ohio Hopewell archaeology, edited by P. J. Pacheco, pp. 225-241. Ohio Archaeological Council, Columbus. 2004 The Newark Earthworks: monumental geometry and astronomy at a Hopewellian pilgrimage center. In Hero, Hawk, and Open Hand: American Indian art of the ancient Midwest and South, edited by Richard V. Townsend and Robert V. Sharp, pp. 72-81. The Art Institute of Chicago and Yale University Press, New Haven. 2006 The Great Hopewell Road and the role of the pilgrimage in the Hopewell Interaction sphere. In Recreating Hopewell, edited by D. K. Charles and J. E. Buikstra, pp. 122-133, University Press of Florida, Gainesville.