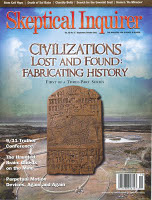 Part One of the review of the Lost Civilizations of North America DVD, co-authored by Kenneth Feder, Terry Barnhart (former OHS Curator of History), Deborah Bolnick and me, is now available online at the Skeptical Inquirer‘s website. It is gratifying that this review now will be more widely accessible. I hope the second and third parts to the series follow soon!

Civilizations Lost and Found: Fabricating History – Part One: An Alternate Reality “While it is tempting to ignore the documentary as nonsense, the high production values coupled with the selective inclusion of academically credible scholars have resulted in its gaining international attention. Glenn Beck featured it prominently and favorably in the August 18, 2010, broadcast of his television program, and the website promoting the DVD claims it won the Best Multicultural Documentary Award at the 2010 International Cherokee Film Festival. In a series of three articles, we will provide a scientific commentary on the interpretations expressed in this video concerning the ancient history of North America, using the documentary itself as emblematic of a far broader attempt to write an alternative history of the New World that is wholly unsupported by any archaeological or historical evidence.”

Here is the link to the entire article: http://www.csicop.org/si/show/civilizations_lost_and_found_fabricating_history_-_part_one_an_alternate_re