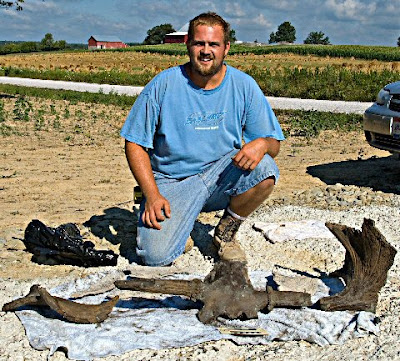 In early August, backhoe operator Tyler Underwood (photo 1) got a big surprise while digging up clay to build a horse rink on Ryan Kings land near Medina. He was digging at about 16 feet deep, when his equipment brought up the partial skull and some antler pieces of what looked like a huge moose. In response to several phone calls, staff from the Ohio Historical Society traveled to Medina County the following week to examine the specimen and to see if more of the animal could be found. OHS Curator of Natural History, Bob Glotzhober quickly recognized the skull and antlers as those of the extinct Stag-moose (Cervalces scotti) that is known from Ohio during the Pleistocene or Ice Age. Glotzhober and OHS archaeologists Linda Pansing and Bill Pickard worked a long day with Underwood to recover quite a few more bones and bone fragments.

This is only the ninth time the remains of a Stag-moose have been found in Ohio. Most of the previous finds have been limited to just a small handful of bones. Ryan Kings specimen consists of 34 bones mostly broken fragments making it one of the more complete finds to date in Ohio. A female Stag-moose uncovered near Hartville, Stark County, Ohio in 1987, and on exhibit at the Ohio Historical Society museum in Columbus, remains the most complete specimen. While this newly found skeleton is broken in many pieces and may not make much of an attractive show piece, it is very valuable to science. We would hope to someday be able to obtain a carbon-14 date on the bones. Three of Ohios 8 other specimens have been dated, and register at 10,230; 11,840; and 11,990 years before present. This one came from by far the deepest known site, so it may be much older yet! The skeleton also has some mysteries that need to be answered. All of the large leg bones show fractures that have been determined to have happened near the time of death. Were these caused by some huge predator, by glaciers still in the region, by early human hunters or something else? The bones are currently under a carefully controlled, slow-drying process in the OHS museum collections. As they become drier and more stabile, we hope to examine them in more detail and perhaps find some clues that will help answer those questions.