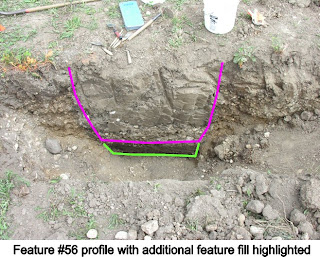 Excavations for the 2011 Hocking College / Pickawillany summer archaeology field school officially got under way on July 25, 2011. This years crew is smaller than in seasons past so work is more easily concentrated in specific areas. The primary focus was the continuation of work on feature #10, a large pit feature approximately 1.5 in diameter x 1.2 meters deep identified by remote sensing. It is also in the middle of the greatest concentration of European artifacts that perhaps indicates the location of the traders stockade. Feature #10 was actually exposed two years ago adjacent to a large post feature that may have been a flag pole but the inclusion of a prehistoric celt in the chinking stones makes this observation slightly problematic. The mitigation of feature #10 began last season and only about half the feature or less was excavated before the weather and the end of the season made it necessary to secure the feature for continuation this year. Artifacts recovered last year included an iron butt plate for a Stage 3 French fusil or musket dating to about 1730 or 1740. There were also several French spall gunflints a couple of iron strap-like objects and a sizable quantity of faunal remains. 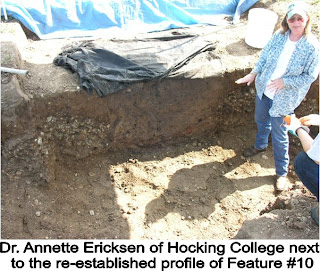 This years work was to clear off the feature, finish the excavation of the north half and to draw a profile map of the southern half. To help move things along a small backhoe was used to excavate the surrounding soils and expose the pit profile. Near the bottom of the remaining southern half of the feature a known metal detector hit turned out to be the jaw assembly of a leg hold trap. Also recovered were a couple of animal bones, a few beads and few gunflints. Not far from Feature #10 is the location of Feature #56. It was excavated in 2009 and produced an iron butt plate for a Stage 1 French fusil that dates to the very early years of the 1700s. One almost identical to it was recovered at Michilimackinac several years ago. There was also a gun barrel section and a pack saddle brace among other items. It seemed a problem that the true bottom of the feature may not have been reached in 2009, so while the backhoe was on site it was decided to relocate the feature and cut its profile by digging a trench next to it. 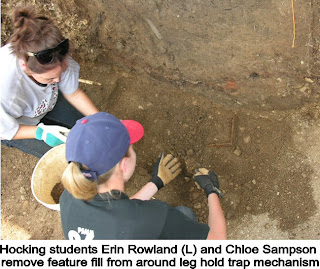 As suspected there was still a 15-20 cm lens of feature fill below where loose sands and gravels had caved in on the pit bottom and sealed it off from immediate view. Recovered here were a number of mammal and fish bones, a couple of gunflints and several beads. The back hoe may be brought back to do further work. Additionally Feature #11, though to be another pit feature located just east of Feature #56, is being explored by the Hocking students. If the weather holds out it looks to be a promising field season at Pickawillany, the place where Ohio history began. More next week! 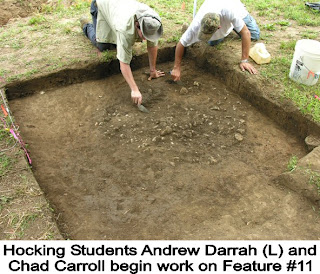