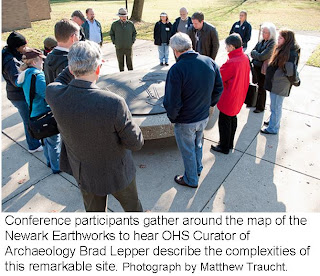 The Ohio Historical Society, in collaboration with the Hopewell Culture National Historical Park and the University of Cincinnatis Center for the Electronic Reconstruction of Historical and Archaeological Sites (CERHAS) held the first Ohio World Heritage Conference from November 5-8, 2011.

The conference was convened to develop a strategy for the nomination of the eight Ohio earthwork sites being considered for the prestigious World Heritage List maintained by United Nations Educational, Scientific, and Cultural Organization (UNESCO).

In 2008, eight Ohio earthworks were selected by the United States Department of the Interior for inclusion on the United States Tentative List of sites to be submitted to UNESCO for inscription on the World Heritage List based on two nominations prepared by the National Park Service and the Ohio Historical Society. One nomination was for Serpent Mound in Adams County, constructed by the Fort Ancient culture.

Conference participants included scholars from across the nation: archaeologists, anthropologists, and cultural landscape historians; museum and park administrators with experience in the intensive nomination process; and Native Americans to whom these sites are sacred. 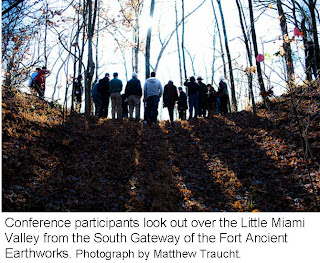 During the four-day conference participants toured most of the earthworks to gain a better under-standing of the sites and their attributes. Four formal discussion sessions were moderated to discuss issues related to the development of the nominations.

At the conclusion of the conference, participants were optimistic about the progress of the nominations, but were well aware of the work remaining to document the merit of the sites. The earliest either of the nominations could be inscribed on the World Heritage list would be 2014, and there is no guarantee of this.

The conference was funded by The Ohio State University Newark Earthworks Center, the Ohio Humanities Council, the Ohio Archaeological Council, Cincinnati Preservation Association, Warren County Convention and Visitors Bureau, and the Ross County Convention and Visitors Bureau and with donations from individuals as well as funds from the Ohio Historical Society and Hopewell Cultural National Historical Park.