From May 6-9, 2013, the Ohio Department of Transportation (ODOT) was recently performing some repair and replacement of Works Progress Administration (WPA) gutters with a more modern gutter and drainage system as well as upgrading a sidewalk.  The work was located near the Ulysses S. Grant birthplace in Point Pleasant, Ohio in Southern Ohio. 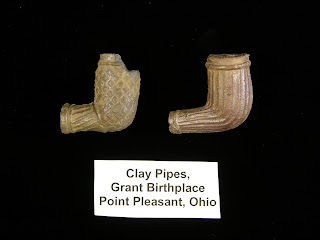 During recovery efforts, nearly 100 artifacts were recovered, including pipe fragments, ceramics, a glass medicinal bottle and sagger fragments.  Saggers are defined as large cylindrical fired ceramic vessels, with or without holes in the sides, used to contain unfired pots (especially glazed ware) or other kinds of ceramic products (e.g. clay pipes).   All of the materials, while postdating the Grant’s occupation of the home, came from a few of the pipe making factories that played an important part of industry in the town of Point Pleasant, Ohio.  A number of different pipes had been recovered previously back during the replacement of the Original Grant Memorial Bridge in 1984 and during archaeological investigations by ODOT on Lot 37 in 2011. 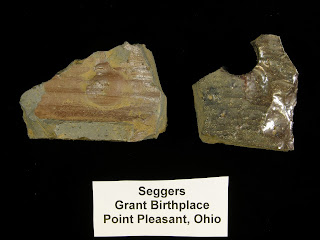 Many of the pipe fragments resemble the Milled Chesterfield Diagonally Ribbed type and the Ribbed Elbow type.  According to previous research, these two types of pipes were produced by the Lakin-Kirkpatrick-Davis-Peterson (LKDP) Pottery, which was the longest operating pottery plant in Point Pleasant, Ohio.  While many of the pipes are only fragments, approximately four pieces were complete.  However, it appears that the complete pieces (and likewise the fragments) were discards due to a warped shape or other abnormality during the firing process. 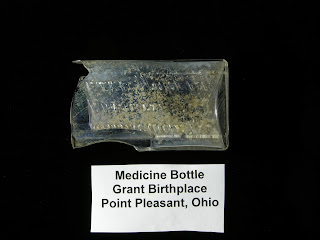 Of special interest were sagger fragments and a medicine bottle that were recovered near the Grant Birthplace.  The saggers, like a majority of the clay pipes, were found in fragments.

The final artifact of interest was a medicine bottle that was recovered during trenching efforts in front of the Grant Birthplace home.  The medicine bottle had embossing on it that read: Peter Nodler Pharmacist, Covington, KY.  Nodler was a prominent druggist in Covington during the last third of the 19thcentury with a store at Fifth and Madison Streets in that city. He was also well known as a dealer in all sorts of lamps and accessories as well as doing a good trade in ginger ales and soda waters that he supplies to retail dealers. He seemed well established in Covington about the same time the LDKP Pottery was in business.  Stay tuned for more discoveries!