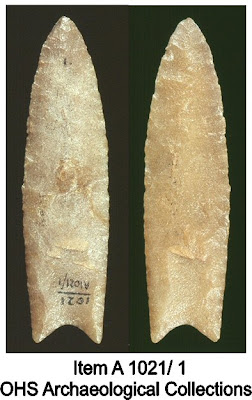 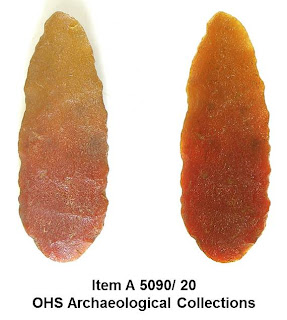 A while back I posted a blog entry entitled Of Cheese Heads and Clovis Points concerning a fluted point (A1021/1) from Bratton Township, Adams County, Ohio. It would appear that it could have very well been made from a raw material known as Hixton Silicified Sandstone (HSS) that would have had to make its way into the central Ohio River Valley in one form or another all the way from Wisconsin.

The Ohio Historical Society recently accepted a collection from the University of Arkansas that was donated to them in 1959 by a fellow named Harry McPherson. It was his personal collection of Ohio material and assembled by him in the 1940s and 1950s.

At that time McPherson worked for the Ohio Historical Society as the Director of Historical Sites and his collection was made up of material he largely surface collected at various locations around central and south-central Ohio including some in the vicinity  of a couple of OHS sites. His collection from workshop sites along Flint Ridge is particularly impressive.

It was a different time and such methods are no longer practiced. There are literally thousands of very impressive archaeological specimens in the McPherson collection from grooved axes to botanical samples from disturbed trash pits and our dedicated volunteer crew is already hard at work putting things in order. There was one object that caught my attention as soon as I saw it – a rather ordinary shaped but distinctively colored biface or preform (object A5090/20), about 4 inches long.

What was exceptional about this particular item was that it appeared to be made from an orange-red variety of HSS, sort of a first cousin to the yellowish material the Adams County fluted point (A1020/1) was made from.  Making it even more interesting is that according to McPhersons records it was also found in Adams County, Ohio and although his notations arent any more specific, many of the 30 or so Adams County items in his collection were found within a mile or so of Serpent Mound in Bratton Township, the same township as where the fluted point was found back in the early 20th Century.

It seems highly coincidental, to say the least, that two objects made from what appears to be the same exotic raw material should be found in the same general neighborhood so to speak and yet so far from its supposed source. Some lithic reduction technicians I know from Wisconsin that are expertly familiar with HSS had no trouble identifying it as such and I tend to agree.  But I guess each observer will have to make up their own minds as they see fit. What do you think?