Although not particularly of an archaeological nature, I thought the following would be of interest. One can only imagine the awe and astonishment experienced by the first technically trained surveyors as they came across the mounds and earthworks that once covered the landscape of Ohio. These individuals had the distinct privilege to be among the very first outsiders to see them in their pristine state and with the ability to recognize and understand the sophisticated engineering involved in their construction. I really wonder what they thought. One of these elect few was Israel Ludlow, the man who surveyed Ohio, or so it would seem. He was one of those remarkable individuals that appeared to be everywhere and do everything. Although not a Daniel Boone or a Simon Kenton, without him and his colleagues would we really know where we are in Ohio. The following is part of an article that appeared in Professional Surveyor Magazine, March 2009 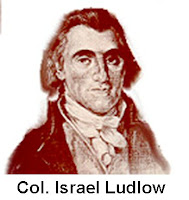 After the Revolutionary War had ended in 1783, many eastern settlers migratedto the Ohio Valley in search of better land. During the 1780s, four major land surveys were conducted in the Ohio Valley, north of the Ohio River: the Virginia Military District, the Seven Ranges, the Ohio Company of Associates Purchase, and the Symmes (or Miami) Purchase.Before these lands could be legally settled, they had to be surveyed and platted. To survey these lands, certified surveyors were brought to Ohio from the east. One of those surveyors was Israel Ludlow.Israel Ludlow was born in 1765 on his familys farm at Little Head, near Morristown, New Jersey. This farm was located near a battlefield of the American Revolution. While growing up in New Jersey, Ludlow had studied to become a surveyor.

Earlier Surveys
Ludlow had done some surveying in the Seven Ranges in 1786-87. He worked for Thomas Hutchins, the first and only Geographer of the United States. While conducting this survey, Ludlow surveyed the western boundary of the seventh range. Ludlow also surveyed for the Ohio Company Purchase in 1788-89. Here, he worked for general Rufus Putnam. Ludlow surveyed along the Ohio River and along the northern boundary of the Donation Tract. This northern boundary bears the names of Ludlows Line or Israel Ludlows Survey.

Cincinnati
In 1787, Hutchins had ordered Ludlow to report to judge John Cleves Symmes to survey Symmes land. In 1788, Ludlow traveled to the Northwest Territory to survey the Symmes Purchase.Ludlow was their first surveyor and was the surveyor who laid out the east-west base line for this survey. He located this base line at a point six miles north of the southern-most point in the Symmes Purchase.In January 1788, three proprietors, Matthias Denman, Colonel Robert Patterson, and John Filson, purchased about 800 acres of land from Symmes for less than $500. Denman provided the money, Patterson provided the first 30 settlers, and Filson would survey the tract and establish this new town. On September 22, 1788, Ludlow, Symmes, Denman, Patterson, Filson, and more than 50 other men arrived to begin the survey. Unfortunately, Filson disappeared while surveying and was presumed killed by the Indians. Ludlow subsequently assumed Filsons interest in establishing this new town.On December 28, 1788, a second group of men landed and founded this new town. This new town would be called Losantiville: a composite of words meaning city across from the mouth of the Licking River. The L was for the Licking River, os was Latin for its mouth, anti was Greek for opposite, and ville was French for city.By January 7, 1789, Ludlow had surveyed the towns tract and had platted the town. Ludlow had surveyed two types of lots for this town: 30 out-lots of four acres each and 30 in-lots of one-half acre each. As an incentive to lure settlers into this new town, the three proprietors offered the first 30 settlers a free in-lot and a free out-lot. On their out-lots, each new settler had to raise two successive crops of not less than one acre. On their in-lots, within two years each settler had to build a house of at least 25 square feet and at least 1½ story high and with a clay, stone, or brick chimney. Initially, the settlement of Losantiville was slow and only a few cabins were built. Three cabins were built on the in-lots; 20 cabins and a single frame house were built on the out-lots.In August of 1789, General Josiah Harmar selected a site just west Losantiville as the site for Fort Washington. With this new fort for protection, settlement increased. By 1790, there were about 500 residents of Losantiville. By 1791, there were about 700 residents.On January 2, 1790, general Arthur St. Clair, governor of the Northwest Territory, established Hamilton County and made Losantiville its county seat. Because St. Clair disliked the name of Losantiville, he changed its name to Cincinnati.Cincinnati was named in honor of the Society of the Cincinnati, which was an organization of former officers of the American Revolution and of which St. Clair was a member. The society was named for the retired Roman dictator, Lucius Quinctius Cincinnatus, who left his farm to lead his Roman soldiers to victory, then returned to his farm. Aside from St. Clair, other members of this society were Israels father, Cornelius Ludlow, and President George Washington. Although there were troubles with the Indians in the area during that time, Ludlow continued to survey Symmes Purchase. Ludlow had repeatedly asked for military protection while surveying but was denied. In 1790, Ludlow built a blockhouse along Mill Creek, which he named Ludlow Station (present-day Cumminsville, Ohio). In 1796, Ludlow built a frame home, which many people called the Ludlow mansion.Ludlow, who had obtained the rank of colonel, completed the survey in early 1792. On May 5, 1792, Ludlow sent his final report to secretary of the treasury Alexander Hamilton. In his report, Ludlow stated, I now have the satisfaction to present to you the whole of the survey of the Ohio and part of the Miami purchases executed agreeably to instructions.

Hamilton
On October 30, 1794, General Jonathan Dayton had acquired the entire third or Military Range of the Miami Purchase. On December 12, 1794, in a fractional section, Ludlow laid out and platted a new town. On July 27, 1795, Ludlow had acquired full ownership of the fractional section of Number 2 in Township 1 and Range III. Some of this surveyed this land was located near Fort Hamilton.While surveying this town, every street was 65-feet wide. The main street (High Street) was 99-feet wide, the alleys were 16-feet wide, and all in-lots were 99 by 198 feet.The rest of the land was surveyed in 1795-97. However, the town plat was not recorded until April 28, 1802. Initially, this new town was to be called Fairfield. However, its name was later changed to Hamilton, after Alexander Hamilton.Ludlow became the sole proprietor of that town. He donated a square for public buildings and another square for a church and a cemetery. He also donated $4,200 for the construction of the county court house.

Dayton
On August 20, 1795, a group of men agreed to purchase Ranges VII and VIII of the Miami Purchase, which was located between the Little Miami and the Mad Rivers, from Symmes. Unfortunately, it was later discovered that Symmes did not own this land and that these men had to obtain that land title directly from the federal government.This group consisted of St. Clair, General Dayton, General James Wilkinson, William McMillan, and Colonel Ludlow. They had planned to build three new settlements in that area.On September 21, 1795, two surveying parties under Daniel C. Cooper and Captain John Dunlap set out to survey the ranges and to clear out a road. On November 4, Ludlow laid out a new town at the junction of the Great Miami and the Mad Rivers and named it Dayton, after General Dayton.Dayton was platted into 280 in-lots, each measuring 100 by 200 feet, and 50 out-lots, each measuring 10 acres. The original north-south streets were named St. Clair, Jefferson, Main, Ludlow, and Wilkinson Streets.The first settlers would each receive a donation of one out-lot and one in-lot. Their lot locations were chosen by lottery. These same first settlers were also given the option of purchasing an additional 160 acres at $1.13 per acre.In Cincinnati, 46 men and their families had agreed to relocate into the Dayton area, but only 19 of those men had fulfilled that agreement. On April 1, 1796, those first settlers finally arrived into the area.

Greenville Treaty Line
On August 3, 1795, a treaty at Fort Greenville (present-day Greenville, Ohio) was signed between General Anthony Wayne and several Indian tribes of the Northwest Territory. Under this new treaty, the United States received about two-thirds of present-day Ohio.A boundary line was established to mark this new territory. This line began at the mouth of the Cuyahoga River on Lake Erie and ran up the river to the portage with Tuscarawas River and down the Tuscarawas River, to a crossing about one mile above Fort Laurens. From this crossing, the line ran southwesterly to Fort Loramie, then northwesterly to Fort Recovery, then in another southwesterly direction to the Ohio River, across from the mouth of the Kentucky River.In January 1797, General Putnam, the first Surveyor general, hired Ludlow to survey this new boundary line. On July 9, Ludlow began surveying the boundary line from the crossing north of Fort Laurens to Fort Loramie. This line ran S. 78 degrees, 50 minutes W. for 153 miles and 2,310 feet.On August 3, 1799, Ludlow began surveying the boundary from Fort Loramie to Fort Recovery. This line ran N. 81 degrees, 10 minutes W. for 22 miles and 3,399 feet.A few days later, on August 8, Ludlow began surveying the boundary from Fort Recovery to the Ohio River, opposite the mouth of the Kentucky River. This line ran S. 11 degrees, 35 minutes W. with only six miles being in present-day Ohio.

Later Surveys
In 1798, Ludlow surveyed land west of the Great Miami River. He surveyed from the Great Miami to a line that ran north from the Ohio River at the mouth of the Great Miami. This new line would become both the first principal meridian and Ohios western boundary.After the Greenville Treaty Line was surveyed in 1799, Ludlow surveyed part of the boundary line between the Miami Purchase and the Virginia Military District. From the source of the Little Miami River, Ludlow ran his line approximately 20 degrees west of north to the Greenville Treaty Line. This was a distance of nearly 42 miles. This line, which was adopted by Congress in 1804, was named the Ludlow Line.

Later Years
On November 11, 1796, Ludlow married Charlotte Chambers of Chambersburg, Pennsylvania. They had four children. After a four-day illness, Ludlow died on January 21, 1804, at the Ludlow mansion, at the age of 38. He was buried with Masonic honors at the First Presbyterian Church of Cincinnati, which was located upon a square he had donated for churches, schools, and courts.