According to David Morrison, a senior scientist at NASA, about one out of ten Americans are worried that the world actually might be coming to an end on December 21st, 2012. 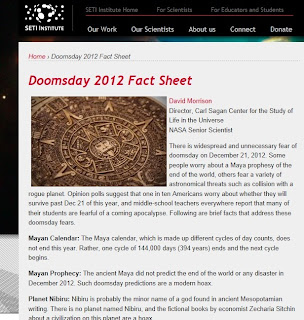 That’s a lot of people experiencing unnecessary anxiety during this holiday season. Just in case you are one of those people and are looking for reassurance that the world isn’t, in fact, approaching oblivion, Morri-son has prepared a helpful DOOMSDAY 2012 FACTSHEET that should go a long way towards setting your mind at ease. According to Morrison, “The ancient Maya did not predict the end of the world or any disaster in December 2012. Such doomsday predictions are a modern hoax.” Anthony Aveni, an expert on archaeo-astronomy, offers a more in depth discussion of the issues in his article “Apocalypse Soon?” on the Archaeological Institute of America’s website. He writes that “pulling prophecy from [Mayan] monuments … amounts to an exercise in cherry-picking data — often incomplete, vague, or inapplicable — to justify a nonsensical, pre-formed idea.” He further suggests that all of this “the Y12 hysteria” may be an indication that archaeologists and astronomers aren’t doing our jobs. As much as I hate to admit it, I think he’s right. Archaeologists and other scientists need to work harder at public education — and that’s the reason for Morrison’s DOOMSDAY 2012 FACTSHEET and this blog post. The Mayans didn’t have much, if anything, to do with ancient Ohio and Ohio’s Hopewell culture doesn’t appear to have attached any particular significance to 2012.

Nevertheless, if Morrison is right that one out of 10 Americans are worried about an upcoming apocalypse, then there undoubtedly are modern Ohioans out there with concerns about what might happen on December 21st. So as a public service, I will state for the record that although archaeologists and astronomers can’t say that nothing at all bad will happen in December, we categorically can state that the ancient Mayans never claimed the world would end in 2012 and there is absolutely no archaeological or astronomical evidence whatsoever to suggest any major world-ending catastrophe is about to happen.