Some weeks ago, I was filling in holes that my family’s dog Trin had dug in our front yard. In the loose dirt around one hole I was surprised to see the familiar shape of a stone spear point.

I have been involved with many projects over the course of my career in archaeology and I’ve found loads of spear points, arrowheads, and other traces of ancient human activity. But this was special. The ancient American Indian that made this point and lost it here around 5,000 years ago occupied, for a time, the land on which I now live. Holding in my hand the work of a fellow human being that also called this little valley home gave me a sense of shared intimacy that I had never experienced quite in the same way before. This powerful sense of connection hit me, figuratively and literally, where I live. This man and myself, though separated by a vast gulf of time, were linked by this place and by this bit of stone that he had fashioned and lost and I had found. It was a reminder that the past isn’t just something we encounter at special places, like Cairo, Mexico City or the Newark Earthworks.

The past is all around us and echoes of ancient lives reverberate in the soil beneath our feet.The spear point I found is of a type that archaeologists have named Lamoka points. This kind of spear point was made by people during the Late Archaic period between about 5,500 and 4,500 years ago. Although initially defined in New York, Lamoka points are found from eastern Iowa to the Atlantic coast and from central Michigan to northern Kentucky. 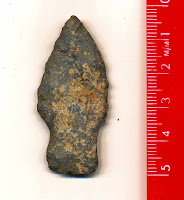 The point isn’t broken and I didnt find any other artifacts while I was filling in holes, so it is likely the tip of a spear thrown by an ancient hunter at a white-tailed deer. Either he missed and lost the spear in the underbrush, or he hit the deer but failed to kill it and the deer ran off with the spear lodged in its side. For whatever reason, the man never retrieved his flint point.That man’s frustrating loss, however, is archaeology’s gain. His lost spear point now forms part of the record of our knowledge of Ohio’s past. It’s not a dramatic or revolutionary discovery, but it’s a piece of the archaeological puzzle, a tessera of the mosaic of prehistory, an episode in the life of an ordinary man who lived an extraordinarily long time ago and spent at least part of his life in what would become my front yard. For more information about the Late Archaic period, see the following webpages: Archaic period http://www.ohiohistorycentral.org/entry.php?rec=1286&nm=Archaic-Period Archaic spear points and knives http://www.ohiohistorycentral.org/entry.php?rec=1254&nm=Archaic-Spear-Points-and-Knives Lamoka points http://www.oplin.org/point/identify/bifacial/points/stemmed/lamokapt.html