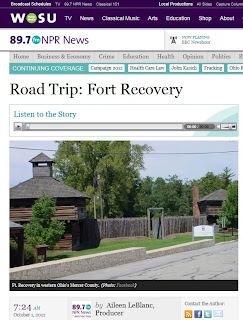 Take a virtual road trip to Fort Recovery— the site of two of the most epic battles in the history of America’s Indian Wars.

The Miami Chief Little Turtle and the Shawnee Chief Blue Jacket led a coalition of Native American forces to a complete victory over the larger, but ill-equipped and poorly disciplined army led by General Arthur St. Clair. It was the worst defeat ever suffered by the U.S. Army at the hands of Native Americans.

Two years after the battle, General Anthony Wayne established a fort on the site as part of his campaign to end Native American resistance to the expansion of the fledgling United States. The largest force of Native American warriors ever assembled in eastern North America attacked the fort, but this time, they were unable to defeat the more disciplined American army protected behind the strong walls of the fort.

WOSU radio recently featured Fort Recoveryin their popular “Road Trip” series. Now, no matter where you live, you can take a brief audio tour of the battlefield. Hopefully, it will inspire you to want to visit this remarkable site in person.