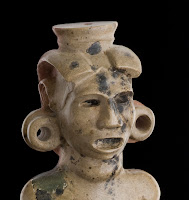 Yesterday, the Bill to designate the Adena Effigy Pipe as Ohio’s State Artifact was unanimously passed by the Senate State Govenment Oversight and Reform Committee. Several young women from the Columbus School for Girls were there to testify on behalf of the bill. In their testimony, they gave their reasons for why this particular pipe should be our State Artifact:

“the Adena Pipe was found in a mound in Thomas Worthingtons backyard. Thomas Worthington was our 6th governor and considered the father of Ohios statehood. His home is near Chillicothe, which was Ohios first and third capital. This makes the pipe more significant to our state history, because it has a connection with the prehistoric people from 2,000 years ago, as well as with our early statehood from 200 years ago. This history can be viewed by todays citizens, because they can see the original Adena Pipe, visit Adena, and tour Chillicothe. Making real life connections with our states history will keep it alive for generations living today and for many years to come.” 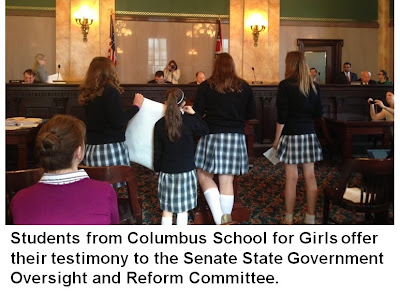 “Because we care about our history, we want to honor our state and the Adena people who were the first Ohioans. It is very important to us to make the Adena Pipe the Ohio State Artifact. Please vote yes on Senate Bill 33.” Next the bill goes before the full Senate. Let your senators and representatives know you support designating the Adena Pipe as our State Artifact!