This Saturday, February 11, 2012 at the Campus Martius Museum in Marietta 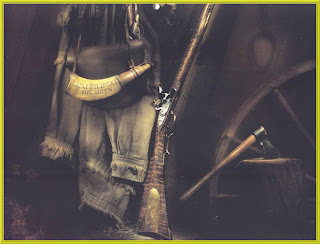 Have you ever wondered about the Kentucky flintlock long rifles used by Daniel Boone or Simon Kenton in the frontier days of the 1700s? By studying the wonderful sets of parts that have been recovered during military archaeology projects in Ohio, what can be learned about the life and times of people who used huge flint muskets in the Ohio wilderness at places like Pickawillany, Fort Laurens, Fort Meigs and Fallen Timbers? How were they made and how were they used? Do you know that the muskets of the Revolutionary War were often nearly as long as the fellow using it was tall? Why was that? You might be surprised to learn that the phrase Kentucky Long Rifle is actually a misnomer. The rifles made famous by Boone, Kenton and thousands of other frontier folk really had very little to do with Kentucky.

Flintlock long rifles actually developed from a Pennsylvania German tradition or school of gun building that had its beginnings in the mid-1700s in the boroughs and townships of Lancaster and Lebanon Counties in Pennsylvania and some adjoining areas of Maryland and Virginia. From there it spread out and moved west with the frontier. This eastern tradition of long barreled, full stock gun building and its allied trades reached Ohio by the early 1800s. Here it developed into what is referred to as the National Road Tradition. It was a distinctive school of gun making that would ultimately produce aesthetically pleasing and well designed half-stock rifles, artistically decorated and typically of a lighter caliber than their Pennsylvania counterparts.

You might also be surprised to know that there are artisans today that still produce these functional works of art much the same way their forefathers did two or more centuries ago. This is an official invitation to attend the 2nd Annual Contemporary Gunmakers and Allied Artisans Show this Saturday, February 11, 2012 at the Campus Martius Museum in downtown Marietta Ohio. The show will be from 9:30am to 4:00pm. Museum admission is $7 for adults and $4 for students. Free for OHS members and children under 5. Here is an excellent opportunity to see the rifles, powder horns and hunting pouches as re-created by modern masters in that still time honored tradition. For further information contact Bill Reynolds at the Campus Martius Museum (800-860-0145) or see the attached link describing this and other activities this year at the Campus Martius Museum.

It should be mentioned here that Mr. Larry Bryner, gun builder extraordinaire and friend of all things Marietta, was severely injured in a farming accident late last fall. Larry was one of the founding members of the Association of Ohio Long Rifle Collectors as well as a participant at last years event. He is an artist in the truest sense and a genuine master in the Ohio gun building tradition. Our thoughts and prayers go out to him for a speedy recovery.

Thanks to the NMLRA for the use of their calendar picture
http://campusmartiusmuseum.org/