Sharon Memorial Hall has been a residence, a museum and currently serves as office space for a number of businesses. On Sunday, September 18th, visitors will have the opportunity to explore this historical building in Worthington during Ohio Open Doors.

Originally this home was the elegant residence for three generations of Wrights. It was built in 1861 by Horace Wright before his marriage to Henrietta Tuller. Subsequent generations of the Wright family occupied the home until 1940.

Following a War Memorial Levy in 1945, the property was conveyed to the Trustees of the Sharon Township Memorial, as it is now known. The building housed the Historical Society museum from 1955-1969. It now houses office space for a variety of uses. Although the balustrades no longer adorn the hipped roof of the old Wright home, many structure features of the Victorian residence have been retained. Of note is the stone arch outlining the recessed entry and the intricately worked faux marble fireplaces in the front rooms. In the entry hall there is a beautiful carved walnut elliptical staircase with a handsome newel post. The impressive front porch and columns were added in the early 1900s. The back additions containing the current kitchen and bathrooms were added after 1911 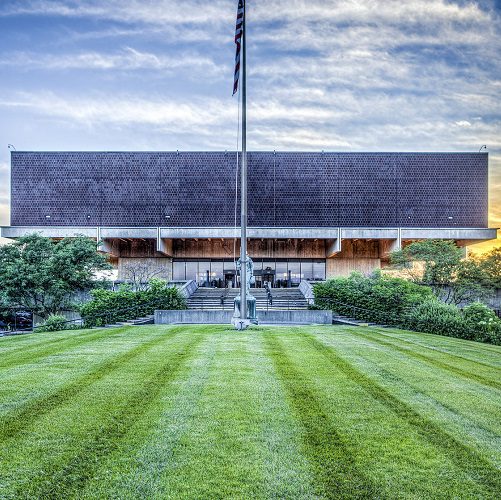