THE HISTORY OF COLUMBUS DID NOT BEGIN IN 1812

THE HISTORY OF COLUMBUS DID NOT BEGIN IN 1812

The Columbus Historical Society has a great new exhibit at COSI celebrating the bicentennial of the City of Columbus.

The Ohio Historical Society contributed a number of artifacts to the exhibit, including a 9,000-year-old flint spear point and a 1,000-year-old pottery vessel both found in the vicinity of Columbus.

These ancient tools remind us the history of Columbus did not begin in 1812. In fact, it began long before the citys namesake, Christopher Columbus, is said to have discovered America. American Indians and their ancestors have been living here for more than 13,000 years and Columbus was their home long before it was ours! 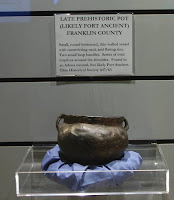