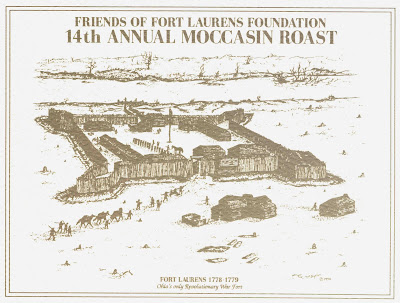 The Friends of Fort Laurens Foundation will hold their 14th Annual Moccasin Roast fundraiser dinner at Fort Laurens State Memorial between the hours of 5:00 and 8:00 pm on Saturday, September 26, 2009. Ft Laurens is notable as the only Revolutionary War fort within the boundaries of the State of Ohio. In late 1778 an army of 1200 led by General Lachlan McIntosh set out from Fort Pitt to make a move along the wilderness trace known as the Great Trail against the British stronghold at Detroit, long a hotbed of British activity against the American interests in the trans-Appalachian west. By mid-November the American Army had made it as far west as the Tuscarawas River where it was decided to build a fort as a jumping off point for an all out move toward Detroit the next spring. Ft. Laurens was so named in honor of McIntoshs friend and benefactor and first president of the Continental Congress, Henry Laurens. The fort was quickly erected and manned with a garrison of about 170 soldiers. The reminder of the army returned east to Ft Pitt.

During the particularly harsh winter of 1778-79 the Ft Laurens garrison found itself wholly under equipped and under provisioned for life at the edge of the wilderness. It is likely that the activities at the fort had been under British scrutiny since construction began in November and it was only a matter of time before they would make their presence known. In late February 1779 a work party of 19 soldiers sent out to collect firewood from just south of the fort was attacked from ambush by Indians and British Loyalists. The assault occurred just out of musket range (120 yards+/-) so the effectiveness any covering fire from the fort was negated. At the scene of the ambush the mayhem seemed to be over as quickly as it began. The unfortunate members of the work party were clubbed, hacked, scalped and stripped of their clothing. When the smoke cleared, so to speak, 17 lay dead in the snow and the other 2 taken prisoner and never heard from again. That night the Indians employed a ruse de guerre or trick of war of continuously circling behind a nearby hill before passing in front of a huge bonfire to convince the soldiers in the fort that they were surrounded by nearly 1,000 Indians by. In actuality there were only 180 Indians and 50 or so British regulars. However the ruse had its intended effect of convincing the soldiers they were vastly outnumbered and to venture forth from the fort would be disastrous. The soldiers in the fort soon exhausted their provisions and were forced to eat raw deer flesh from an animal taken just outside the fort and when that was gone, to grub for roots. They were finally reduced to boiling hides and moccasins to make a weak broth. This sad and sorry state of affairs continued for a month until relief arrived at the fort on March 23, 1779.
The Moccasin Roast is an annual event held by the Friends of Fort Laurens Foundation to commemorate and honor the hardships suffered by a small garrison of soldiers forced to endure the privations of war on the edge of the wilderness. For further information on the Moccasin Roast or other activities of the Friends of Fort Laurens Foundation go to: