THE ARCHAEOLOGY OF A RENOWN[ED] HOPEWELL MOUND CENTER –MOUND CITY

THE ARCHAEOLOGY OF A RENOWN[ED] HOPEWELL MOUND CENTER –MOUND CITY 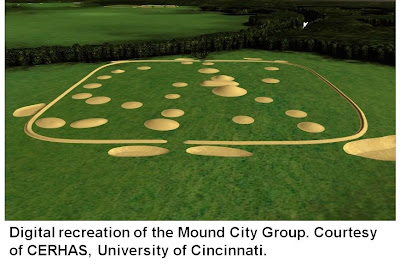 When you arrive at the threshold of Mound City in Chillicothe, the view before you is, as its name suggests, reminiscent of a cityscape. The dense cluster of mounds surrounded by a low earthen wall is, however, not a place where ancient Native Americans lived. Instead, it is one of the greatest concentrations of mortuary ceremonialism in the ancient Americas. In my April column in the Columbus Dispatch, I summarize some of the conclusions reached by Dr. James Brown, Professor Emeritus of Anthropology at Northwestern University, after 50 years of studying Mound City. Brown’s final report of investigations has just been published by the Midwest Archeological Center and it was worth the wait. The publication is timely, because Mound City, along with several other key Hopewell culture earthworks, is on theUnited States’ Tentative List for sites to be considered for nomination to the UNESCO World Heritage List. And Brown’s analysis demonstrates overwhelmingly that MoundCity belongs on that list. 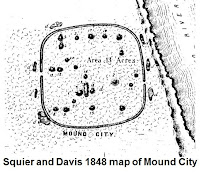 Brown’s report also synthesizes the research of previous generations of archaeologists at Mound City, including the pioneering work of Ephraim Squier and Edwin Davis in the mid-19thcentury. To Brown’s credit, rather than criticizing their comparatively rough field methods, he acknowledges the important contributions made by these early investigators. For example, he notes that the “fieldwork in 1963 and 1966 revealed the embankment to have the same asymmetrically oblong shape that Squier and Davis (1848) mapped.”

It is now recognized that the “flat-sided ellipse” or “round-cornered square” shape of the enclosure is not haphazard, but closely corresponds to “the plan view of the better constructed sub-mound structures, such as Mound 10, complete to the positioning of the gateways roughly in the center of the short ends, precisely where the entrances to the sub-mound structures are located (Figure 4-1).” Brown writes that the embankment is “an enlarged version of the shelters it surrounds a structure of structures, so to speak.” 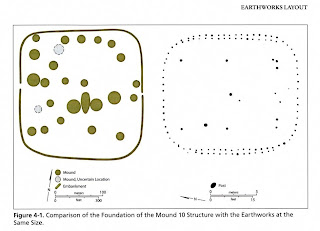 Nor is the alignment of the earthwork hap-hazard. The four sides of the embank-ment are aligned close to the cardinal directions suggesting to Brown that the Hopewell builders oriented the site to the cosmos. This is certainly consistent with what we have learned about the alignment of other Hopewellearthworks, especially the Newark Earthworks.

Browns book includes contributions from several other scholars, including a chapter on the environment and geographical context of Mound Cityby OHS’s Curator Emerita, Martha Potter Otto. 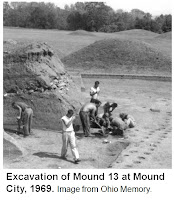