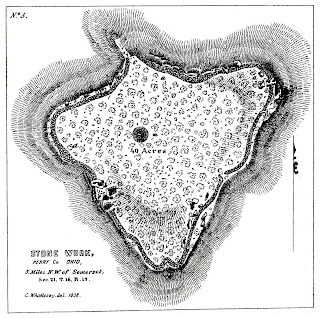 The spring trek to the Glenford Native American Fort is coming up Saturday, May 12th from 11:00 a.m. to 2:00 p.m. While this Hopewell-Adena site was listed on the National Register of Historic Places in 1975, it has been rarely seen by the general public.

The Historical Society of Perry County and property owner Elizabeth Cooperrider are hosting a walking tour of the fort for people that would like to experience Ohio’s ancient past. The Glenford Stone Fort has been well known to archaeologists for nearly two hundred years as one of the best examples of a fortified hilltop enclosure in the state.

The hike begins at the Cooperrider farmstead at the foot of the Glenford Stone Fort hill and passes through a beautiful mature growth forest before ascending to the plateau. After exploring the perimeter wall and the central ceremonial mound, the group will witness a spirit-welcoming ceremony and enjoy lunch featuring a stew cooked over an open fire.

After lunch, join the Ohio Historical Society’s Curator of Archaeology Brad Lepper for a program on the Adena and Hopewell cultures, both of which participated in creating the sacred landscape of this remarkable stone enclosure.

The hike to the hill-top takes about 45 minutes. For anyone with physical limitations, well have volunteers taking people up to the fort on a gator. 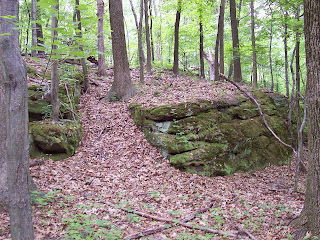 The hike is limited to 200 people, so make your reservations early. Cost is a donation to be used to further the society’s preservation efforts. For reservations e-mail the Historical Society of Perry County at [email protected].

The event will be held rain or shine, so wear comfortable shoes! The so-called fort consists of a mile-long stone wall that traces the perimeter of a hill enclosing the flat hill top area, which encompasses 26 acres and a stone mound in the center approximately 100 feet in circumference and 11 feet high. The following quotations from scholarly works help explain the forts importance to Ohio archaeology:
A fortification known as the Glenford Stone Fort, is one of the most interesting and important hill-top enclosures, because of its admirable location and the fact that its remains are still sufficient for its form to be easily traced and its construction to be understood. Emilius Oviatt Randall (1908), The Masterpieces of the Ohio Mound Builders, Ohio Historical Society. Glenford Fort owes its remark-able state of preserva-tion to having been in the hands of one family for close to two hundred yearsthe wall is probably much the same as it looked when Atwater first laid eyes on it in 1818. Norman Muller (2008) in Glenford Stone Fort and Other Stone Construction in Ohio and Beyond.