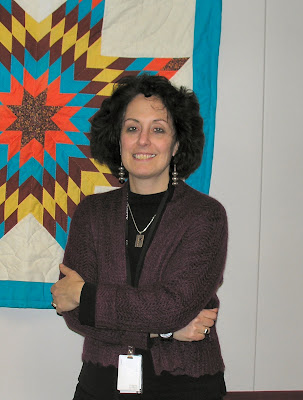 Recently I had the pleasure of sitting down and talking with Sharon Dean who, on December 15, 2008, started her position as Director of Collection Services for the Ohio Historical Society.

Linda: Thank you so much for taking time out of your busy schedule to participate in this interview for our readers.
Sharon: You are very welcome.

Linda: Tell our readers a little bit about your previous experience.
Sharon: Id be glad too. I received my Ph.D. in Anthropology from New School University in New York. Some of the positions I have held include Executive Director of the Cleveland Artists Foundation; Curator, Head of Cultural Anthropology, Visual Arts and Conservation for the Cleveland Museum of Natural History; Assistant Curator, Head of Photographic Archives, National Museum of the American Indian, Smithsonian Institution; as well as Adjunct Professor for Case Western Reserve University, The College of Staten Island, New York; and Queens College, New York.

Linda: How did you get interested in cultural anthropology?
Sharon: Originally I wanted to be a wildlife photographer and travel to the African savanna. But, while taking pictures offered a way of seeing something, it didnt answer questions as to why things were the way they were. Cultural anthropology helps to address those intriguing questions by looking at social demographics, processes and relationships. This is what drew me to the field. Also being a photographer can be a pretty solitary job and I am too much of a social person to have been happy being a photographer in the long run.

Linda: What do you enjoy the most about cultural anthropology?
Sharon: Fieldwork! I have had the great pleasure to work with Mayan populations in Central America, the Waimiri Atroari of Brazil, and the Paiute and Shoshone in the western United States.

Linda: What was one of the most memorable or rewarding experience you have had doing field work.
Sharon: That is hard question to answer since there are so many things I could pick. One of the projects I participated in was while I was at the National Museum of the American Indian. I was in charge of the photographic archives and was tasked with cataloging over 100,000 photographs that were taken between 1880 and 1950. As part of this collection were a series of images taken of Mayan individuals showing front and profile views that dated between 1920 and 1930. It should be noted that during the late part of the 19th and early part of the 20th century there was a movement within physical anthropology called craniometry that theorized one could tell how intelligent a person was by examining the measurement of their skull. Needless to say these antiquated views are no longer accepted today. I wrote a grant to go to the area where the pictures were taken to see if anyone knew who these people were so we could tell their story. It was really rewarding to be able to find out about the lives of the people in the photographs and to be able to give family members copies so they could have images of their parents and grandparent. It was fulfilling to be able to take a negative (the stereotyping an indigenous people) and turn it into a positive by being able to contribute and give something back to their community.
Another was while I was at the Cleveland Museum of Natural History. I was part of a project reviewing how Paiute and Shoshone basket making techniques changed to accommodate tourism tastes in the early part of the 20th century. The intricate designs and weaving techniques are very beautiful and impressive and the research resulted in a book entitled Weaving A Legacy: Indian Baskets and the People of Owens Valley, California.
And the final project Ill bring up for the blog was also for the Cleveland Museum of Natural History. We had some cultural material from the Waimiri Atroari of Brazil and were interested in doing an exhibit. So we applied for and received a permit to visit them to discuss the exhibit. Before I go into anymore detail, I want to explain what is special about the Wairimi Atroari. In the 1960s the Government of Brazil built a hydroelectric dam and mining companies were extracting resources from the Waimiri Atroari reservation. The impacts of these actions were relocation, disease, welfare and subsequently the population of the Waimiri Atroari declined from approximately 1500 to 350 individuals. They sued and won a 25 year subsidy from the government and decided to take their future into their own hands by returning to a traditional way of life. They fenced off 250 hectares of land, returned to sustainable agriculture, raised cattle, wore traditional dress, made baskets for export, and decided to raise their children speaking their native language until the age of seven when they are taught Portuguese. Since then they have thrived and rebuilt and strengthened their culture. Unfortunately before our exhibit planning was finished they became involved in a political battle so the project ended. But it was truly awe inspiring to see how they took control of their circumstances and the future of their culture.

Linda: What attracted you to your position at OHS?
Sharon: As Director of Collection Services I have the opportunity to work again with two of my passions; photographic and ethnographic collections. I believe that by working together as a team we can accomplish great things and I look forward to supporting and enabling our staff in the process. I hope to open the door for better communications with the Native American population all over the State in regards to issues regarding human remains and funeral objects. One thing I am particularly excited about is instituting a Curators Roundtable where all of the Curators will come together, share their concerns, talk about research projects, publications they are doing, etc.. By doing so we can take advantage of each others wisdom and help set the direction of the collections and formulate long term collection and research goals.