Join me at the Octagon Earthworks this Sunday, July 8th at 7:00 PM, for a discussion of what we know about one of the most amazing artifacts ever found at the Newark Earthworks — or anywhere else for that matter! 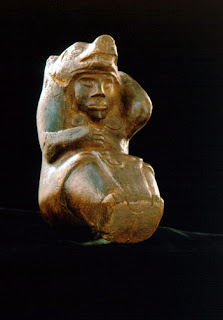 The “Shaman of Newark” is the name I’ve given to a small stone figurine that appears to represent a shaman, or spiritual leader, of the Hopewell culture. The Hopewell culture is the name archaeologists use to refer to groups living throughout southern  Ohio between about 100 B.C. and A.D. 500. This unique sculpture was discovered in 1881 while workmen were digging at the location where the largest burial mound at Newark once had stood. This mound had been at the center of the cluster of mounds that appear to have served as the principal cemetery for the Newark Earthworks. The Shaman of Newark is a naturalistic carving of a man or a woman (no gender-specific traits are evident) wearing bear regalia, including a bear mask on his or her head and bear paws covering the hands. The left hand is on the mask as if caught in the act of either raising or lowering it over the shaman’s face. In many tribal societies, the shaman served as a combination of priest, rabbi, and healer. The shaman was believed to be able to bring rain for the crops or aid hunters in locating game animals.

In 1775, the Moravian missionary John Heckewelder witnessed a man wearing similar regalia along the streets of the Delaware Indian town that would become modern Coshocton. Heckewelder was astonished and wrote that he thought he was seeing some kind of evil spirit: The dress this juggler had on, consisted of an entire garment or outside covering, made of one or more bear skins, as black as jet, so well fitted and sewed together, that the man was not in any place to be perceived.  The whole head of the bear, including the mouth, nose, teeth, ears, &c., appeared the same as when the animal was living.” Heckewelder used the derogatory term “juggler,” but Chief Killbuck assured him that the man was, in fact, the village’s “Doctor” on his way to visit “one of his patients who was bewitched.” Does this strking similarity in appearance mean that there was essential continuity in some ceremonial practices from Hopewell times through the historic period? We’ll discuss this and other issues on Sunday evening!

Check out this video for a preview of some of the things I’m likely to say about this amazing sculpture.