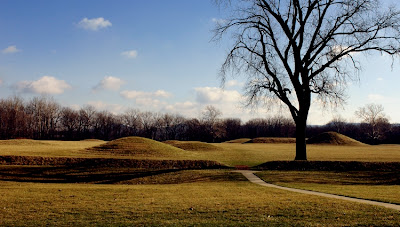 Join N’omi Greber from the Cleveland Museum of Natural History, for our weekly lecture series. About 2000 years ago in

What do earthen serpents, giant octagons, and Salisbury steak all have in common? They are all folded into this presentation! Over your lifetime you have probably seen dozens of maps and photos of Serpent Mound in fourth grade and college texts, gracing the covers of coffee table books, and perhaps on T.V. shows about ancient aliens (why not!). The site needs little introduction. But a recent magnetic survey has uncovered a potential new wrinkle that we (those involved in the Serpent Mound Project) suspect will surprise you and get people thinking again about this famous old site. The High Bank Works, a unit of

Invasive species, such as zebra mussels and kudzu, cause billions of dollars’ worth of economic damage in each year. These species include organisms that proliferate in environments outside their ancestral range following introduction by humans.  Modern biologists and ecologists are intensively studying the impacts of the invaders on native ecosystems, but they are limited to studies of years or decades.  Species invasions, however, also happened in the geologic past due to natural causes, such as intervals of sea level rise.  Paleontologists can study these ancient invasions to learn about the longer term (thousands of years) impacts of invasive species.  In this presentation, I will analyze the impacts the invasive species have had during two different intervals in the geologic past: the Late Devonian mass extinction (~360 million years ago) and the Late Ordovician Richmondian Invasion (~450 million years ago).  During both of these intervals, the shallow seas that covered eastern

Textiles are an essential part of our daily lives but they are so ubiquitous and modern manufacturing has made them so inexpensive that few of us think about how they are made and where the components came from.  Textiles made by prehistoric people, however, represent significant skill and time invested in their manufacture. The differing structures of these fabrics suggest different uses; the intricate interlacings and patterns of coloration suggest aesthetic and semiotic meanings.  Although the textiles that have been recovered from Ohio Hopewell sites are fragmentary, they tell a story of extensive knowledge of the use of local plant and animal materials to produce flexible functional textiles. By replicating the Ohio Hopewell textiles we come to understand more about the skills and knowledge required.  Adding together the time and effort required in each production step leads us to an assessment of the value of those fabrics.  Study of the small fragments themselves and experimental replication leads us to a better understanding of the people of the past.

For additional information, contact the Hopewell Culture National Historical Park at at 740-774-1126