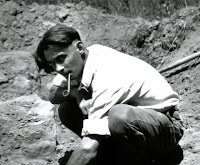 Robert M. Goslin was an important figure in both Archaeology and Natural History at the Ohio Historical Society (OHS) from the late 1920s through the early 1960s. His name shows up wherever anything interesting was going on and it’s clear that he often contributed greatly to the success whatever project the staff was working on.
Goslin began his career in museum work at the tender age of 11 when he established his own museum consisting largely of ancient Native American artifacts he had collected from the fields around his Lancaster home. 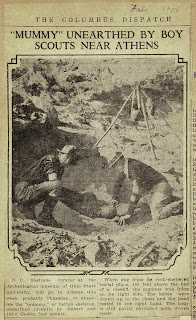 In High School, he and his brother conducted excavations into several rockshelters in their neighborhood, including Kettle Hill Cave. The Kettle Hill mummy was among their more important discoveries, which they donated to OHS.

Goslin worked as a volunteer for Henry Shetrone during the Ohio Historical Society’s excavations at Seip Mound between 1927 and 1928. In 1929, he was hired as an Assistant in Archaeology and he worked in that capacity until 1932. Between 1936 and 1942, he worked as an archaeologist with the WPA in Tennessee. He returned to Ohio in 1942 and worked as a technical assistant in the Physiology Department at the Ohio State University until he was appointed Assistant in Natural History at OHS in 1948. In subsequent years, he was identified in OHS publications as an Assistant in Archaeology and Natural History. 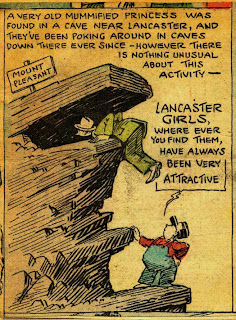 Robert and his 12-year-old son died in a tragic fishing accident in 1964.
Brad Lepper
Posted May 9, 2013
Topics: Archaeology