Where did the ancestors of the Native Americans come from, how did they get here, and how long have they been here? What is the latest archaeological and genetic evidence for the peopling of the Americas? Did multiple groups of people colonize the Americas? How have scientific and popular views of Native American origins changed in the past 200 years?

The Johnson-Humrickhouse Museum in Coshocton, Ohio, will present on April 25, 2009, a public symposium entitled, Old Questions, New Science: Reinterpreting Native American Origins in light of modern methods and technology. Anthropologists and archaeologists have worked together for two hundred years to develop a cohesive understanding of the origins of American Indian cultures. Using new scientific methods and technological innovations, scientists today can repudiate unfounded suppositions while providing new and exciting theories.

Old Questions, New Science will examine the archaeological theories and speculations of both the 19th and 21st centuries. New technologies that have revolutionized our understanding of the first Americans include the growing field of molecular anthropology. Studies of the DNA of modern American Indians have revealed evidence for an Asian migration during the late Pleistocene Epoch. The symposium also will address archaeological conundrums such as the Kennewick Man (9,000 year-old human remains discovered in Washington State in 1996) and reports of pre-Columbian contacts between the Americas and Asia, Europe, and Africa. 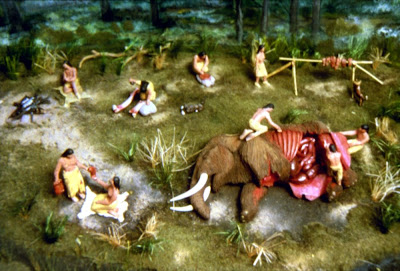 Five sessions will be presented:

In the Beginning: The Early Search for Human Origins in the New World.
Dr. Terry A. Barnhart

The search for human origins in the western hemisphere began in the 15th century and continues today. Archaeology, a model of empirical science, has played an essential role in that odyssey from the late seventeenth century to the present time. Theories continue to change as archaeologists formulate new methodologies that greatly advance the accumulation of knowledge about America’s ancient remains and peoples. But the quest to infer and extrapolate the unknown from the known has been a constant from that day to this. Dr. Barnhart will focus on how the study of the prehistoric mounds and earthworks of the Ohio Valley contributed to that discourse from the first Euro-American encounters with the mounds in the 1780s down to the close of the 19th century.

Dr. Terry A. Barnhart is professor of history at Eastern Illinois University. Dr. Barnhart joined the History Department at Eastern in 1994, having previously worked within the Education Division at the Ohio Historical Society since 1983. He is the authoritative voice on 19th century Ohio anthropology and archaeology. He has authored one book, Ephraim George Squier and the Development of American Anthropology, contributed chapters to several other books, and published numerous journal articles on the history of 19th century American archaeology and anthropology.

When did people first discover the Americas? Were these people Asians, Australians, or Europeans? Did they trek over the Bering land bridge, coast-hop in simple watercraft, or cross the icy Atlantic in fleets of kayaks? Were they hunters of big game or gatherers of nuts and shellfish? Was their way of life ended by the catastrophic impact of an asteroid or comet? Or did they simply adapt to changing circumstances with incremental changes in technology? You might think that with all the know-how and firepower of 21st century science, the answers to these questions would be coming into sharper focus, but a perusal of recent articles in newspapers and popular science magazines would make it appear that we’re farther than ever from a consensus on these and other questions about the earliest inhabitants of the New World. Ohio Historical Society archaeologist Bradley Lepper examines what we know, what we don’t know, and why we may not know what we think we know about the first Americans.

Dr. Bradley Lepper is a Curator of Archaeology for the Ohio Historical Society and an occasional visiting professor at Denison University. He is the author of Ohio Archaeology: an illustrated chronicle of Ohio’s ancient American Indian cultures, winner of the Society for American Archaeology’s 2007 Public Audience Book Award. He also writes a bi-weekly column on archaeology for the Columbus Dispatch.

How are genetic data used to infer population history and why are such studies are important? Recent findings resulting from collaborations with Native American communities in North and South America will be presented.

Dr. Lewis is Assistant Professor, Department of Anthropology, at the University of Oklahoma. He has published a number or articles in scientific journals as well as in edited volumes, the most recent in New Bioarchaeological Perspectives: Essays in Honor of Jane E. Buikstra (still in press). Dr Lewis recently co-published the largest genome-wide survey of genetic markers for native American communities. His studies examine how human genetic variation is structured between different regions of the world. From these findings, he can infer the number and path of initial migrations into the Americas.

Though much progress has been made in illuminating Americas ancient past, it cannot be denied that mysteries about that past persist. Archaeologists view these mysteries as fascinating challengesand temporary ones, at thatthat will be solved even as new mysteries present themselves. Such is the nature of science. Dr. Kenneth Feder will focus on a number of significant, but as yet unanswered questions about Americas past including: 1) Who were the first Americans and when did they arrive here? 2) What (or who) was responsible for the massive die-off of large animals at the end of the Pleistocene? and 3) Was there contact between Native America and Asia, Europe, or Africa before Columbus arrived in AD 1492 and before the Norse settlement of Newfoundland at around AD 1000?

Dr. Kenneth L. Feder teaches archaeology at Central Connecticut State University where he is a Full Professor of Anthropology. He has authored a number of books on archaeology including Frauds, Myths and Mysteries: Science and Pseudoscience in Archaeology.

A summary period will allow time for any follow-up comments and questions. This hour will begin by allowing the speakers to engage each other or clarify their talking points. Then the floor will be given to the audience for questions and comments. Leading this session is Dr. Robert Fox, a corporate ergonomist and Friend of the Museum. Dr. Fox did his graduate work in anthropology and the population biology of ancient populations with focus on the ancient Egyptians.

Forms are also available at http://jhmuseum.org/symposium2009/registration.pdf.

Early registration fee is $22.00 and $17.00 for students with I.D. Late registration, after April 21st, is $25.00. Fee includes a Proceedings booklet and morning refreshments.