The Newark Holy Stones are a series of carved stone objects bearing Hebrew inscriptions that were supposedly discovered in the mid-19th century and offered as evidence that ancient Israelites built the magnificent Newark Earthworks and the Jacksontown Stone Mound the largest stone structure north of Mexico.

The two most famous of the Holy Stones, the Keystone and the Decalouge Stone, are on exhibit at the Johnson-Humrickhouse Museum in Coshocton. Although some people still take them seriously, my colleague, avocational archaeologist Jeff Gill, makes a convincing case that the archaic-looking Hebrew writing on the Decalogue Stone has a number of errors that prove its a 19th century fabrication.

The interesting questions are who perpetrated the hoax and why? 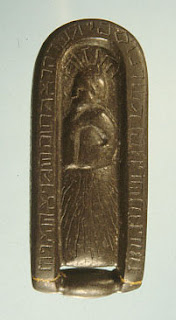 Jeff and I are convinced the Holy Stones are more than a simple hoax. Instead, they were elaborate scientific forgeries that were crafted to uphold the essential Unity of Man. If the indigenous peoples of America could be shown to be sons and daughters of Adam and Eve rather than a variety of sub-humans, then the removal of Native Americans to reservations and, of more immediate importance to the forgers, the enslavement of Africans could be considered to be crimes against humanity. The forgers may even have felt that these Holy Stones could help to prevent a Civil War by scientifically proving slavery to be unjustified at least from an anthropological perspective.

If that sounds interesting, join me at SunWatch Village on Saturday morning February 16th for my presentation on The Newark Holy Stones: Science, Politics, andReligion in 19th Century Ohio — the second in of a series of lectures on Myths and Mysteries in Archaeology!