The new archaeology exhibit at the Ohio History Center, “Following in Ancient Footsteps,” includes a major donation from the University of Cincinnatis Center for the Electronic Recreation of Historical and Archaeological Sites (CERHAS). 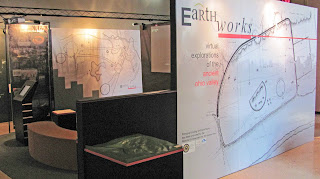 EarthWorks: Virtual Explorations of the Ancient Ohio Valley presents interactive virtual reconstructions of some of the most spectacular ancient architecture in the world. Cultures flourishing in the American heartland 8 to 24 centuries ago built earthen effigies, embankments, mounds, roadways, and enclosures of astonishing size and precision. Some stretch for miles. Many contained exquisite ceremonial artifacts. Some are astronomical markers more exact than Stonehenge. Exhibit visitors may choose up to 90 interactive video topics, many also reinforced on exhibit panels and a timeline. What sets the EarthWorks experience apart is the way it makes these ancient sites memorable, engaging, and broadly meaningful as never before: through visualization, spatial navigation, and multi-voiced interpretation. There are Teacher Guides available for EarthWorks, which are available on the CERHAS webpage: http://earthworks.uc.edu/ETEteacherGuides.htm

The Ohio Historical Society extends its thanks to John Hancock, co-founder of CERHAS and Professor of Architectural History at the University of Cincinnati for providing this marvelous interactive experience for our new exhibit! John is shown on the right in this image standing next to Richard Shiels, Director of the Newark Earthworks Center at the Ohio State University Newark Campus (center) and OHS Curator of Archaeology Brad Lepper (left).