Hopewell Culture National Historic Park’s annual Hopewell Discovery Day will be celebrated again this year on October 10th, 2009 at the Mound City facility just north of Chillicothe on State Route 104. Come and join in on the fun. Activities include mound tours, flintknapping demonstrations, artifact identification, atlatl demonstrations, hands-on crafts, and plant and animal displays. All events are free.
Inaddition to the above events the first modern “Walk of the Ancients”, a week-long pilgrimage along the Hopewell Road from Chillicothe to Newark will commence at Mound City at about 10:00 in the morning. Barring significant hardships,the travelers are due to arrive at Geller Hill just south of Newark on the afternoon of October 16. We wish them well.

The present Hopewell Culture National Historical Park evolved in part from the former Mound City Group National Monument. The national monument was established by a proclamation signed by President Warren G. Harding in 1923 to preserve prehistoric mounds of “great historic and scientific interest.” In 1980 Congress expanded the monument by adding a portion of the nearby Hopeton Earthworks and authorized the investigation of other regional archeological sites to determine their suitability for preservation. The National Park Service recommended four additional sites. Hopewell Culture National Historical Park was thus established in 1992 by a law that renamed Mound City Group National Monument, expanding boundaries at Hopeton Earthworks, and included High Bank Works, Hopewell Mound Group, and Seip Earthworks.

The park protects the prehistoric remains of a dynamic social and ceremonial phenomenon that flourished in the woodlands of eastern North America between 200 B.C. and A.D. 500. The term Hopewell describes a broad network of economic, political, and spiritual beliefs and practices among different Native American groups. The culture is characterized by the construction of enclosures made of earthen walls, often built in geometric patterns and mounds of various shapes. The culture is known for a network of contacts with other groups, which stretched from the Atlantic coast to the Rocky Mountains. This network brought materials such as mica, shark’s teeth, obsidian, copper, and shells to Ohio.

Mound City consists of a 13-acre rectangular earth enclosure with at least 23 mounds. The height of the earth walls of the enclosure is about 3 to 4 feet, with an entrance or gateway on both the east and west sides. All the mounds are dome shaped except for one that is elliptical. The largest mound of the group was described by early explorers as 17.5 feet high and 90 feet in diameter. There are two additional mounds just outside the enclosure. All the walls and mounds have been reconstructed and are clearly visible.

During World War I the Mound City Group site was occupied by a military training center known as Camp Sherman. In the early 1920s after Camp Sherman was razed, the Ohio Historical Society excavated the site and began reconstruction of the Hopewell earthworks and mounds.

The insets below show Mound City and the Schriver Circle as it appeared in Squier and Davis’ Ancient Monuments of the Mississippi Valley next to the same area as seen from the air. With it is an aerial view of Mound City after an early phase of reconstruction. Bill Pickard 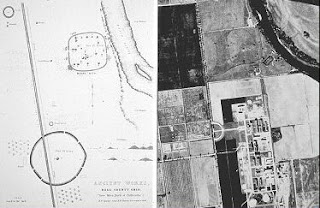 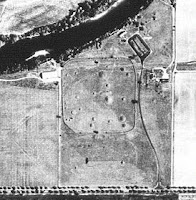