Included within the Ohio Historical Society’s world-class archaeological holdings are several large ethnographic collections made up of cultural items of a more recent or historic origin. Such collections might represent a significant portion of a groups material culture or perhaps just one or two items. Typically ethnographic collections include tools, crafts, weapons and other materials commonly used by indigenous people in different parts of the world – at least different than with which the collector is familiar. These collections were not usually acquired by grand expeditions but more often collected as souvenirs by travelers, explorers, missionaries, soldiers and other world sojourners of the late 19th and early 20th centuries. Eventually the colorful weavings, the spears, the drums and the other prized possessions from far off lands began to take up space around the house and would be disposed of one way or another. Hopefully they would be presented to the museum so others in the community could share in the travelers experience. Almost every large museum has or did have such collections. In a time before mass communication and even the National Geographic Magazine to some extent, ethnographic collections served to demonstrate how folks in far off lands lived, worked and relaxed in everyday life and how they made a living in general. It might possibly be the only window to the greater outside world many hometown folk might ever enjoy.

A new hallway exhibit entitled EXPLORE! will be opening soon at the Ohio Historical Center. The focus will be the breadth of the Ohio Historical Societys holdings and feature items not often included in OHS exhibits. These represent several of the Museums collections from history to library archives to archaeology and include a number of ethnographic items. Below is a selection of spears made and used by the Bontoc Igorot, a native group indigenous to Luzon and other major islands of the Philippines. They were collected by different individuals about the time of the Spanish American War in the late 19th – early 20th Century. Each style of spear is different one to another and has a particular function, either real or perceived. Weapons and other aspects of the material culture of the Igorot people were described in detail by ethnographer Albert Ernest Jenks in The Bontoc Igorot, produced as Ethnological Survey Publications Volume I, by the Department of the Interior, Manila in 1905. 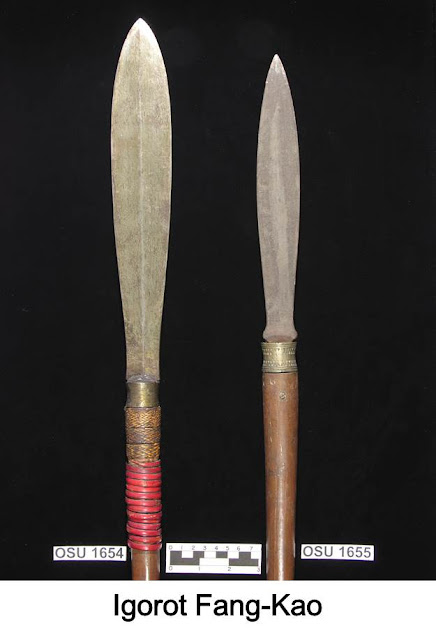 Fang-Kao spears are leaf-shaped, barbless lances typically set into a palm wood or sometimes mahogany handle or shaft by means of a long narrow tang and secured by a metal ring or collar. The shafts are round and tapered toward the butt end and capped by a pointed sheet iron finial. Igorot spears are all constructed much the same although they can be decorated in a number of ways. According to Jenks: The Fang-Kao is not a war blade but used almost entirely for killing caraboas (water buffalo) and hogs”. 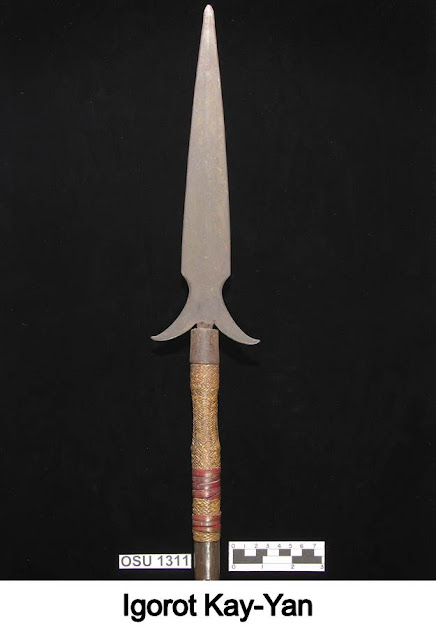 The Kay-Yan is a long narrow leaf-shaped blade set into the handle or shaft on a narrow tang and secured by an iron band. The shaft is decorated with spool-like turnings and rattan weavings, a motif seen on other Igorot weapons. The blade is distinctive in form with a bifurcated base forming two large curved barbs giving the blade an exaggerated fish tail look. From Jenks: The Kay-Yan is a graceful formed blade not used in hunting and employed less in warfare than Sinawalitan. Though the Igorot has almost nothing in his culture for purely aesthetic purposes, the Kay-Yan, he says, looks pretty; but I have seen it carried into war by war parties 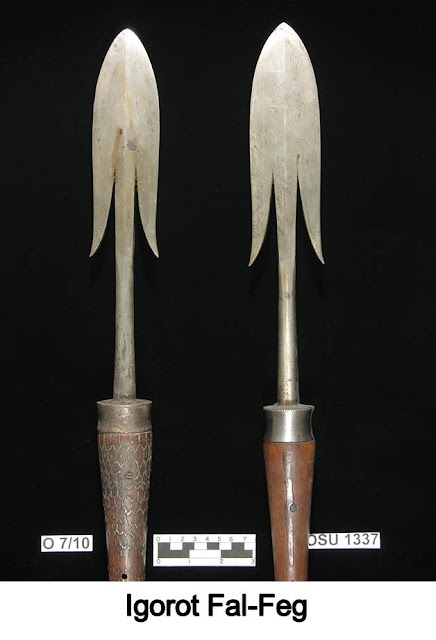 Fal-Feg spears are flat harpoon-shaped blades with pronounced barbs, sometimes double but more often single edged. The spears are assembled much the same as other Igorot spears but in some cases as seen in the Fal-Feg on the left the shaft is decorated with silver wire inlays. Jenks writes: The Fal-Feg is the most common blade, both the single and double barbed versions, used in warfare. Blades range from 6 to 8 inches. The lighter single barbed blades are considered better for warfare than the heavier ones 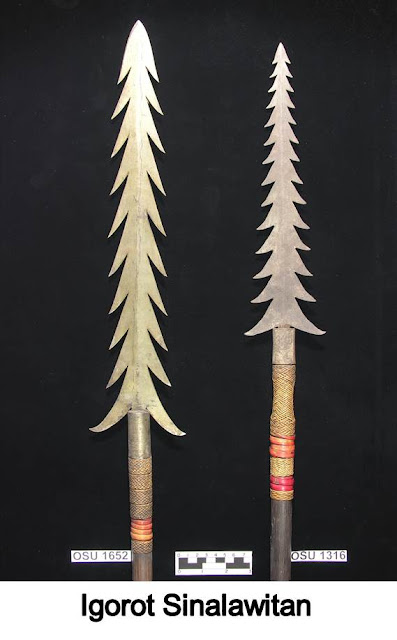 Sinalawitan is perhaps the most curious of all of the Igorot spears and the most recognizable for the multiple barbs lining each edge of the blade, often a dozen or more, giving it an extremely menacing  appearance.   Note the spool-like turnings and rattan wrappings.  According to Jenks: Sinalawitan is not especially a hunting weapon and is not carried into war as much as Fal-Feg. It is prized as an Anito Scarer. When a man passes alone in the mountains the Anito are prone to walk with him; however if a traveler carries a Sinalawitan, Anito will not molest him since they are afraid when they see the formidable array of barbs

There are other interesting items from the OHS ethnographic collection that will be included in future blogs. The EXPLORE! exhibit will be up and running within a couple of weeks. Please take the opportunity to drop by the Ohio History Center to see what other marvelous objects arent often seen.