Join me this Saturday at the Ohio Historical Center for a presentation on the archaeology of Flint Ridge one of Ohio’s very special places. Indeed, this place has been special for more than 15,000 years!

Flint Ridge has been called the “Great Indian Quarry of Ohio” and, according to pioneer Ohio archaeologist Charles Smith, “it is by all odds entitled to be called the ‘Flint Ridge’ not only of Ohio but of the whole country.” Quarry pits and workshop sites occur in profusion across more than 2,000 acres, but they are most thickly concentrated within the limits of Flint Ridge State Memorial in southeastern Licking County, Ohio. Hundreds, if not thousands, of quarry pits occur along the ridge ranging in size from 12 to 80 feet in diameter. A few are as deep as 20 feet, although most are between 3 and 6 feet in depth. 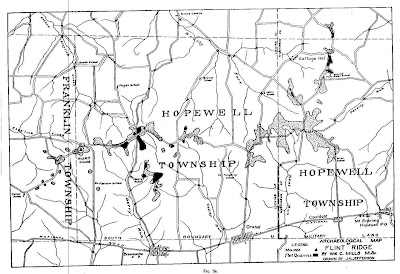 American Indians have used Flint Ridge as a quarry for over 15,000 years, but the popularity of this rainbow-colored flint reached its peak during the Middle Woodland period, between 2,100 and 1,500 years ago. The Hopewell culture of central and southern Ohio, in particular, crafted a variety of tools from this material that were distributed through some kind of “interaction sphere” across much of eastern North America.

William C. Mills, Curator of Archaeology for the Ohio Historical Society, investigated Flint Ridge in 1920. He examined over 30 quarry pits and numerous workshop sites. He found that the Hopewell flintworkers came to the site principally to make three kinds of tools: triangular bifacial preforms of varying size, small, blocky cores generally conical in shape, and the long, thin bladelets that they struck from these prepared cores.

In 1997 and again in 2001, I directed large-scale excavations at Flint Ridge. We learned a number of things from this work, but foremost among our conclusions was that Mills got it right. While other ancient cultures came to Flint Ridge intermittently to replenish their tool kits, the Hopewell culture came with a specialized work force to Flint Ridge to quarry the flint on an industrial scale and work it down into the three basic forms that Mills recognized. The bifaces, cores, and bladelets could have been packed and carried to the Newark Earthworks where it was exchanged or given as gifts to visiting pilgrims. Most of the quarries and workshops on Flint Ridge must be the remains of this Hopewellian “industry.”

For reasons that are still not understood, the use of Flint Ridge flint dropped off markedly after the Hopewell era. It is almost as if this highly distinctive material, so closely associated with the Hopewellian experience, became taboo for the people that had abandoned the other elements of Hopewell culture.

Flint Ridge State Memorial is located four miles north of Interstate 70, three miles north of Brownsville, in Licking County, Ohio. Several trails wind through the flint pits and workshops. A small museum located at the site is built around an actual excavated flint quarry pit. Artifacts recovered from excavations at Flint Ridge and the nearby Hazlett Mound are included in the exhibits. For more information, see the Ohio Historical Society’s website.

If you’re interested in reading more about the recent work at Flint Ridge, check out the technical article I wrote with Ohio State University archaeologist Rick Yerkes and my colleague here at OHS, Bill Pickard:

I will hope to see you on Saturday!